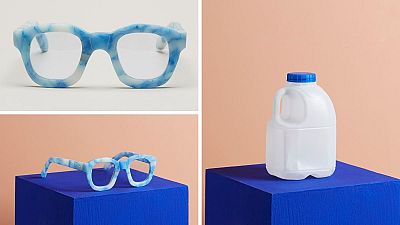 Would you buy your summer sunglasses in the knowledge they were made from waste? Two British and Ukrainian eyewear brands are making headlines this week, both announcing a line of sunglasses made from recycled materials like potatoes, kitchen plastic, human hair and in Ukraine, coffee beans.

OCHIS eyewear is based in Kiev and produces stylish luxury sunglasses sold mainly in Ukraine. In a launch announced just this week, the brand introduces a collection made from coffee waste and flax, glued together with vegetable oil. Various industries already use coffee to produce green versions of their products, such as furniture, cups and printing ink – all reported to smell just like the brewed, hot drink.

The founder, Maksym Havrylenko, has 15 years’ experience in the eyewear industry, with the business having run in the family. His new OCHIS-COFFEE collection began on Kickstarter and soon soared in popularity with donations from all around the world, raising $13,000 in total. Havrylenko told Reuters that he experimented closely with numerous other foods, such as the herbs mint and parsley, before settling on coffee waste as the most durable.

Even so, 300 samples were made before he decided on the perfect prototype. The decision made sense as a sustainable option as “there are millions of tonnes of coffee grounds in the world”, Havrylenko told Reuters, stating that “coffee is black which is the colour of sunglasses which suits everything.”

The sunglasses retail between $78-89 (€70-80) and, upon disposal, turn into fertiliser after just 10 years. The founder claims his “super goal” is to promote the production of “clean products” and “proper waste disposal” in Ukraine and all over the world, according to Reuters. Given 70% of Ukraine, or 41.5 million hectares according to the UN, is covered by agricultural land, it is perhaps unsurprising that the newest sustainable material to have emerged is coffee.

Cubitts is known for its luxury spectacles, selling both prescription glasses and sunglasses, with hand-made frames. But in its most experimental feat yet, the London-based brand is in the midst of creating a new line made from a whole host of recycled materials.

The 10-piece Redux collection is set to feature beautiful designs made from the likes of potatoes, mushrooms, old chopping boards, plastic packaging, sheep's wool, yoghurt pots and strangest of all, human hair. As it stands, “spectacle making is not sustainable”, says Cubitts. The brand is committing to new sustainable goals through the launch, moving away from the semi-snythetic material cellulose acetate, which is made from plastic. Lenses, too, typically come from a plastic called CR39.

Perhaps the most adventurous material being used is mixed human hair, provided by friends and staff at Cubitts. The frames below are made from hair, using clear resin so that individual strands of hair can be seen up close.

Cubitts used Smile Plastics’ ‘Blue Dapple’ material to make a blue, marbled frame from kitchen plastics, equivalent to between 100 and 150 old chopping boards. These whiter frames are also on offer, made from mycelium - the vegetative root system of mushrooms.

Other pieces include rainbow-coloured frames made from barcode labels on plastic bags. The collection is not, as of yet, for sale but the brand plans to make the frames readily available in the near future.