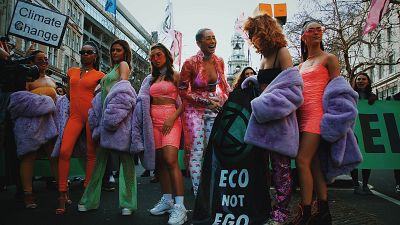 London Fashion Week (LFW) is set to face disruption from Extinction Rebellion protesters – who have vowed to create chaos including a ‘funeral’ symbolising the death of fast fashion.

Extinction Rebellion (XR) this week announced plans to carry out “creative disruptive actions” throughout September’s London Fashion Week. Details of the disruptions remain scarce but a Facebook event posted by XR Boycott Fashion calls on supporters to attend a “funeral” for LFW signalling a symbolic death of the status quo.

‘We don’t want business as usual’

Sara Arnold of Extinction Rebellion’s Fashion Boycott team told Euronews Living: “We don’t want business as usual”. She stated that previous action at February’s Fashion Week had led to engagement on the issue from the BFC, including an invitation to deliver a talk on fashion's role in the climate emergency. Arnold added that XR wants to “divert attention from the action” toward the problem.

“People think we’re just campaigning for climate change, they don’t realise the impact of fashion on biodiversity,” she said when asked about desired outcomes from this disruption.

Why does Extinction Rebellion want to end London Fashion Week?

On top of concerns about biodiversity, Extinction Rebellion's statement calls London Fashion Week a “theatre of excess” and claims that the fashion industry is one of the world's most polluting. The Copenhagen Fashion Summit's Pulse of the Fashion Industry Report stated in 2017 that fashion was responsible for 4% of global solid waste. That's nearly 85 million tonnes of waste being fuelled by rapid changes in trends with some retailers having a stock turnover time of as little as three weeks.

As well as demands for an end to London Fashion Week, Extinction Rebellion are asking supporters to participate in direct action by boycotting fashion for a whole year. Arnold said, “if we are producing 100 billion pieces of clothing, there’s more than enough out there” advocating for consumers to adopt a more circular approach by swapping, renting, or buying secondhand.

A platform for creativity

CEO of the British Fashion Council, Caroline Rush, responded to Extinction Rebellion’s requests with an open letter saying she was willing to meet with the activists to share plans and accelerate change in the British fashion industry. Rush believes “ the fashion industry has to change from within”, advocating for the council’s “role to collate the resources, knowledge and mentoring to create change.”

The letter also describes London Fashion Week as a platform for ‘highly creative businesses that lead the world in terms of design innovation”. Started in 1984, London Fashion Week was launched with politically aware collections like that by prolific protest t-shirt designer, Katharine Hammett. Over the last 35 years it has launched the careers of prominent designers such as Stella McCartney and Vivienne Westwood. There are around 250 designers at this September's show including a number of collections that see designers integrate concerns about sustainability and ethics into their work.

Tansy E Hoskins, fashion journalist and author of Stitched Up - the Anti-Capitalist Book of Fashion, isn’t so sure about this. “London Fashion Week is supposed to be about innovation but innovation has to be in production as well as design” Hoskins told Euronews Living. She also voiced concerns about the boycott action, adding: “I am in favour of boycotts only when explicitly agreed with workers in the Global South.”

When asked whether they had agreed their boycott with representatives from groups in these countries, Extinction Rebellion said that, whilst it was something that they had discussed at length, nothing had yet been explicitly agreed.

The disposability of fashion

Due to the unregulated nature of some countries manufacturing industries, figures are rarely specific but the UN estimates that over 75 million people rely on the fashion industry worldwide for their income. Garment factory workers in the countries in the Global South, such as Bangladesh and Ethiopia, are some of the lowest paid in the industry.Minimum wages rose in Bangladesh in 2018 but the new 8,000 taka (~£80) rate is less than half of what the Global Living Wage Coalition recommends for urban areas of the country.

Hoskins described XR’s action as “important” in dragging companies toward substantial change. However, she believes foregrounded empowerment of workers is a more ethical method of reducing overconsumption. She mentioned low pay as being a contributing factor, as it leads to long hours and subsequent overproduction, in turn encouraging the disposability of fashion. An issue she feels could be solved by giving workers democratic power; power that would allow them to form unions and work together to demand better pay and working conditions.