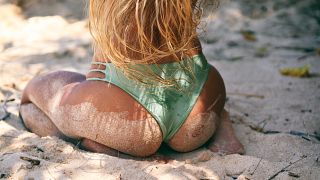 Now that we have your attention, we're talking about cigarette butts not that kind of butt.

A bar in Spain is giving away free beer in exchange for a cup of cigarette butts. The Anglia Ruskin University in Cambridge found that cigarette butts, not plastic straws, are the world's most pervasive man made contaminants and the most frequently littered. Cigarette filters are made from cellulose acetate fibres that, although they are a bioplastic, will not biodegrade on their own.

At the Tibu-ron bar in Castelldefels near Barcelona, bosses are trying to do something about the hundreds of these butts they see littered across the beach each day. In exchange for a jar or cup of cigarette ends you can get a free beer or soft drink.

Owner, Juan Manuel Lema, told local media that although a lot of children were getting involved and drinking litres of fizzy drinks as a result, not many beers had been given away to adults. The campaign called ‘Clean and Care for the Beach’ aims to raise awareness of the incredible polluting potential of cigarette filters.

Just one filter can pollute 3 litres of sea water and this potential for pollution takes between 5 and 20 years to disappear on its own. Many species of sea creatures can also mistake these butts for food.

In recent summers, the bar has also collected thousands of caps that have been sold for recycling to raise funds for charities that help fight childhood cancers.

Bar owners hope others follow in their footsteps and offer beach-goers incentives to keep the sands pollution free. Not only will this reduce pollution from littering but hopefully improve beach experience overall as well.