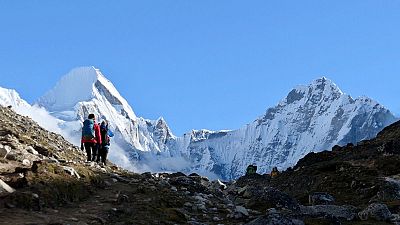 The Nepalese government is mulling the introduction of tough new regulations on those trekking Mount Everest.

The government is working on a plan to scan and tag climbers' equipment and gear after hundreds of items were discarded by exhausted mountaineers on their descent. All climbers would have to deposit $4,000 before their hike and might not get the money back if they return without them.

Thousands of climbers attempt to summit Everest each year, over the course of a few weeks when weather permits. Only a few of that number are successful. Regardless, the throngs making their way to one of the most remote locations on earth are leaving their mark.

Since 2008, mountaineer and environment activist Dawn Steven Sherpa has retrieved more than 20 tonnes of debris from the sides of the mountain on expeditions. That pales in comparison to the 11 tonnes specialist cleaners appointed by the Nepalese government collected over just one month this year.

In June, following the height of mountaineering season at the world’s highest peak, the tourism department spent weeks on the slopes of Everest, collecting food wrappings, cans, bottles and empty oxygen cylinders and entire tents. They even recovered four bodies found along the route.

It’s a perilous task. Oxygen levels are low, temperatures are sub-zero and one small misstep could be fatal.

That’s much of the reason climbers choose to abandon their possessions on the mountainsides, according to Sherpa. But they do have the forethought to rip logos off tents that might identify the culprits, he adds.

Meanwhile, the hordes ascending Everest left behind eight tonnes of their own excrement in a single camp this year. Instead of using makeshift toilets, climbers dig holes in the snow causing waste to fall into small crevasses. However, rising temperatures have thinned the glacier, leaving fewer and smaller crevasses.

The overflowing waste then spills downhill toward Base Camp and even communities below the mountain. People living at the Base Camp use melted snow for drinking water that climbers' toilets threaten to contaminate.

Local mountaineers are calling on the government to mandate the use of biodegradable bags, sparing environmental protection groups the unenviable task of transporting masses of human faeces down the sheer mountain face.

With record numbers attempting the feat, without new measures the problem is likely to spiral. And if it does, it will remain impossible to know exactly how much litter is spread across Everest because it only becomes visible when the snow melts.

Hit play on the video above to find out more.