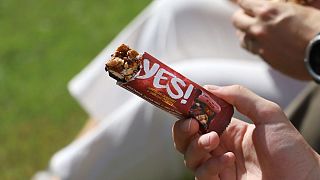 Nestlé has unveiled recyclable, biodegradable paper wrapping on its Yes! snack bars – in a move it claims is a world first.

The announcement came as a major step forward in its drive to make all its packaging reusable or recyclable by 2025. Nestlé’s CEO for the UK and Ireland, Stefano Agostini said the move “represents exactly what more and more people are demanding from manufacturers like Nestlé now and for the future”.

Its ‘flow wrap cold seal’ paper wrapping system uses the same technology which was previously only suitable for plastics and laminates, said the brand. The paper itself comes from sustainable sources, certified by the Forest Stewardship Council (FSC) or The Programme for the Endorsement of Forest Certification.

UK based experts, working at Nestlé’s confectionery R&D centre in York, have coated the paper in a polymer to ensure it remains intact on shelf. But it would biodegrade within six months if it ended up in the sea, Michael Carroll, lead on innovation and sustainability for Nestlé told Sky News.

Though its packaging would degrade in water, a Nestlé spokesman said it hoped not to encourage irresponsible disposal.

“Of course, none of our packaging should end up as litter in the environment and degradability is not the purpose of this innovation," he told Euronews Living.

"While it is true that the wrapper will degrade in a marine environment much more quickly than plastic, this paper packaging is designed and intended to be recycled in the paper recycling stream.”

However, activism group Greenpeace, which has been highly critical of Nestlé’s record on plastic use said the change didn’t go far enough.

The Yes! bars featuring the paper packaging make up a small part of Nestlé’s product portfolio, which also contains KitKat, Aero, Milkybar, Nescafe, Nespresso and a host of water brands including Vittel, Pure Life and Perrier – all of which have come under fire for the amount of plastic waste they produce.

“It’s good that Nestlé is finally rethinking the way the company delivers its products but substituting single-use plastic for another throwaway material is not the way to go,” said Greenpeace Switzerland FMCG (fast moving consumer goods) global campaigner Matthias Wüthrich.

“These kinds of false solutions, which are not environmentally friendly, are what put us in this mess in the first place. We need Nestlé to innovate away from the single-use model entirely. We call on the company to immediately reduce its plastic packaging and implement reusable systems rather than grasping at a quick fix that could cause further environmental disasters such as deforestation.”