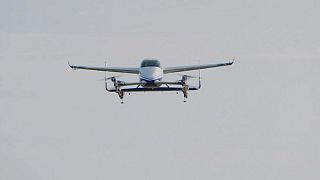 A new generation of plane has joined the ranks of luxury private jets and helicopters on display at this week’s International Paris Air Show.

After years of pressure to bring to bring down the environmental impact of plane travel, engineers have succeeded in creating electronic planes.

Battery powered sky taxis are taking centre stage as the next innovation in air travel. Producing zero emissions during transit, they could provide a greener alternative to the gas guzzling jets of today.

Some 150 companies are clamouring get ahead of the game in the emerging field of electronic flying, according to the AP. Such planes would create options to personalise air travel over super short distances.

Jean Botti, CEO of electronic planes specialist VoltAero, even stepped down from an executive role with aerospace manufacturing giant Airbus to get ahead in the burgeoning market.

For now, those planes are small, private vehicles as the tech is not yet developed enough to power commercial planes. But engineers are working hard to bring battery power to regional flights, says deputy editor of Aerospace magazine, Bill Reed.

Initially, it’s likely that electronic planes will have to combine battery power with jet fuel for a hybrid engine, he adds. Firstly, to power bigger planes, and secondly to meet currently safety regulations as a backup should the battery fail or need charging.

Meanwhile, Airbus is making its own inroads into electric sky travel. It’s showcasing its autonomous air taxi prototype, the Vahana.

This fully electric single-seater has flown 80 test flights, according to the company. The craft is part of the company's research into perfecting eVTOL - or electric vertical take-off and landing.

Its rival Boeing is also displaying its own single-seater air taxi, which has gone from design to testing within a year. Such products are the "future of how you'll travel around cities", believes vice president and general manager of Boeing Next, Steve Norland. In fact, he thinks entire city designs will evolve to accommodate changes in air travel.

"A challenge of moving out in this new space of future mobility is you really need to develop an entire ecosystem, it's not just about the airplane - although that is a key component. It's really about the infrastructure that's going to be needed. The safety of integrating it into the airspace to coexist with manned and unmanned aircraft way into the future."

Hit play on the video at the top of the page for more.