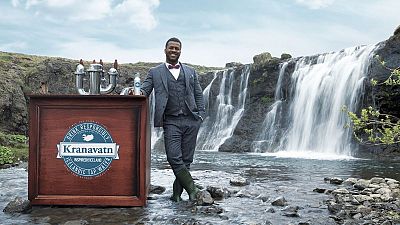 Iceland has launched a new scheme to reduce the amount of plastic waste produced by tourists to the island, by giving its tap water luxury branding.

The brand, Kranavatn, which translates to ‘tap water’, will be offered as a new luxury drink at Iceland’s airport as well as bars, restaurants and hotels from mid-June to promote responsible, plastic-free tourism.

The Icelandic tourism board, Inspired by Iceland, is encouraging visitors to sign up to the Kranavatn challenge online. There, they can collect a voucher equivalent to what they would have spent on bottled water that can be redeemed in selected leisure and retail facilities.

It comes after a survey of 16,000 travellers from across Europe and North America found almost two thirds (65%) admitted to drinking more bottled water while abroad than at home. The majority of those questioned said their increased usage was due to concerns that tap water abroad was unsafe.

Inspired by Iceland said the new branding would raise awareness of its tap water as among the “cleanest and best tasting tap water in the world”. Some 98% of its mains water supply is chemically untreated, while testing has found “unwanted substances in the water” are far below safe limits, according to the Environmental Agency of Iceland.

'Good for the environment'

To support the campaign, the tourism board has released an ad promoting Kranavatn, which describes Iceland’s tap water as a ‘premium quality drink in the making for thousands of years in our glaciers and filtered by endless lava fields'. Its water is 'totally fresh and also good for the environment’, it claimed.

"Behind the humour and wit of the video and Kranavatn brand is an important message and one we're really proud of,” said minister for the environment and natural resources, Guðmundur Ingi Guðbrandsson.

“By encouraging tourists to ditch single use plastics and that the drinks are on us this summer, we are promoting a positive message which encourages more responsible tourist behaviour in Iceland and around the world."

Up to 80% of plastic bottles end up in the ocean or go to landfill, the tourism board said.

"To increase awareness and understanding of this issue will ultimately help reduce plastic waste and we hope the campaign encourages tourists to research the quality of tap water and bring their refillable wherever they are going this summer," added Þórdís Kolbrún Reykfjörð Gylfadóttir, Iceland's minister of tourism, industry and innovation.