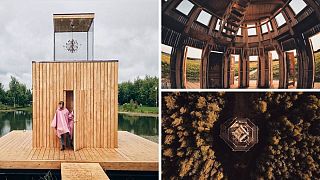 When you think of Europe’s largest landscape park filled with contemporary art, a tiny village in the Kaluga Region is probably one of the last places you’d expect it to be.

Today, Nikola-Lenivets is somewhat of a mecca for Russian architecture and art lovers alike, thanks to the more than 30 art pieces spread over 55 hectares of practically untouched landscape. The countryside park also hosts festivals such as Arckstoyanie, Children's Arckstoyanie and New Media Night, and boasts an eco-friendly farm which attracts visitors.

However, this petite village (located on the territory of the Ugra National Park, a UNESCO designated biosphere) wasn’t always like this. Following the collapse of the Soviet Union, the former agrarian village was largely abandoned and, absolutely by chance, a young architect called Vasily Shchetinin learned about it from a group of retired paratroopers. Vasily had always dreamt of creating a settlement of free artists, where everyone could display something interesting – in the open air or under a sunshade – with absolute creative freedom. Soon enough, his endeavours were joined by the hippy artist Nikolay Polissky, graphic designer Vasily Kopeiko and artist Anna Chizhova, along with her daughter Yulia Bychkova.

After they had joined forces, the artists, who at the time were deemed mad by people from nearby villages, began creating land art objects and in 2004, Nikolay Polissky built the first long-life object: “Mayak” (“Lighthouse”). This was an 18-metre tall installation, erected in three months without using a single nail, on the banks of the cleanest river in the Kaluga Region, the Ugra, and very soon became the symbol of Nikola-Lenivets.

In 2006, the first Arkhstoyanie Festival took place and is now the main event of the year in Nikola-Lenivets. Every summer, acclaimed artists from as far away as Germany, France and Japan arrive in the village to create new temporary and long-term installations, attracting a growing audience of art and architecture enthusiasts. These objects are at once fascinating, bizarre and alluring – and all use local materials.

“Nikola-Lenivets is a private initiative that works towards acquainting people with nature and showing that nature can help us. Natural materials are used for most of the pieces. Things like dead trees are given a second life – this is material that nature doesn’t need but we can keep on using it,” Nikolay told Living.

Nikolay is committed to using only local wood along with similar materials, as well as giving back to the community, and believes that it is more important than ever before for parks like Nikola-Lenivets to exist. He believes that parks like this one should be popping up all over Russia to demonstrate the friendship that can exist between nature and art, especially because so much land has been abandoned and left unused since the fall of the Soviet Union.

“Call me a romantic, but I would like to see society return to the times of Louis XIV, when instead of collecting art, the rich would gift each other parks. It would be good for Russians to care for nature and I think people’s interest towards this could be raised by employing art,” Nikolay explained.

A permanent resident at Nikola-Lenivets, Nikolay firmly believes that he and his family live in heaven and “there are a lot of things to do maintain this heaven”. The vision he has had for Nikola-Lenivets, since day one, has been centred around clean air, clean water and clean products.

For this reason, everything that takes place in the art park is guided by five main principals:

• Working with local expertise and know-how

• Working with local materials, technology and instruments and providing jobs for the locals

• Straight and simple geometry, i.e. straight roads and paths to make it easy for locals to maintain

• Working together and combining the knowledge of different cultures.

No objects involve deep digging during their construction process because Nikolay and his team see no need to damage the earth or ruin the landscape. Nikolay is involved at every stage of the creation of the art, ensuring that natural material is never substituted by plastic, in order to cut costs and save time. Objects are handmade with human warmth.

Many objects are themselves an eco manifestation. For example, the Lazy Ziggurat (2014) brings to light the bark beetle infestation that wiped out many healthy trees. After the media learned the story behind the art object, authorities began to pay attention and a year later the infestation was defeated. The artists hope that visitors also feel a sense of responsibility towards the objects and how they affect nature.

Nikola-Lenivets also features a farm, a café and seriously Instagrammable accommodation. The Morozovs, an older hippy farmer couple, run Ferma, a very simple farm-to-table eatery where they serve whatever they grow on the farm that day. They follow the ecological principle – make and grow everything yourself, without the use of chemicals or pesticides. Much of the fresh produce used at Nikola-Lenivets’ picturesque Ugra Café comes from the couple’s farm. There is also a honey farmer in Nikola-Lenivets and part of the sales proceeds goes towards preserving the local bee colony.

Much of what goes on at Nikola-Lenivets involves the locals directly and provides them with a livelihood. There's a horseback riding school, families that rent out guest houses and a cheesemonger – the local economy has truly blossomed as a result of Nikola-Lenivets starting to attract tourists.

But the team at Nikola-Lenivets is not worried about tourism ruining this peaceful place.

“We used to complain about it and try to get it fixed, but, in reality, the terrible road leading to the art park prevents significant damage from tourism! Only those who really want to come here will go through this mission, so if someone just wants to go for a BBQ, they will think twice or thrice before coming here,” Yulia Bychkova, the director of Arkhstoyanie Festival, told Living.

As for the festival itself, Yulia and Anton Kochurkin (curator of Arkhstoyanie) explained that by making the price for the festival ticket quite high (by Russian standards), again only those that are truly serious about art and nature will attend. Another festival that has recently established itself is Children’s Arkhstoyanie. This event is spread over three days and helps children form a relationship with art, allowing for new educational methods to be tested and partners to be made with reputable organisations like Gorky Park’s Green School, the Tretyakov Gallery, etc. And, of course, this festival instils a sense of responsibility towards nature at a young age.

Nikola-Lenivets is open all year around and there is only a small entrance fee of 250 rubles (about 3.40 euros). It is about 220km away from Moscow, but getting there is not the easiest – or fastest – of tasks. Once you do arrive though, prepare to be taken aback by the scale and beauty of the installations, sculptures and art objects, all set against a backdrop of traditional Russian landscape. It takes a while to walk around the entire park, so perhaps consider spending the night. There is a whole range of accommodation options, from guest houses to camping. The Clover houses are particularly in demand and have even won design awards they are so impressive.