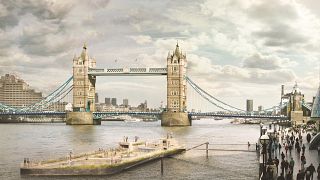 Inspired by the open water lake bathing of Zurich, the river baths of Basel, and the floating harbour pools of the Nordic nations, architect Chris Romer-Lee became convinced he could combine these eco-friendly solutions in one innovative project: a new floating pool on the Thames in London. Filtered naturally and built from sustainable wood, the Thames Baths are finally near to becoming a reality. Romer-Lee has also worked on lido proposals in other cities from Margate to Melbourne. His practice, Studio Octopi, places sustainability and green-mindedness at the very heart of their design ethos. Here he explains how a Swiss swim triggered an obsession.

Tell us about your plan for Thames Baths

“Thames Baths was founded in 2013 for an Open Call competition seeking ideas for the River Thames. I was in Zurich swimming in the lake when I became aware of the competition. It seemed so obvious back then. Our mantra became ‘Reintroducing swimming in the Thames’ after I met Caitlin Davies who wrote the book Downstream: A History of Swimming in the River Thames. The initial plans were so well received by the public that we developed two other iterations and then launched a crowdfunding campaign to fund development of the idea. 30 days later we had £142,000 to employ consultants and begin to work out exactly how we were going to achieve the dream.”

Where next for the project?

“We’ve had so much help and support over the years. The campaign continues despite the authorities resisting the idea. The opportunity to get children, adults and over 60s swimming in a heated, naturally filtered pool in the Thames is what drives me on. We cannot give up and won’t give up. Every major European city has these pools and the citizens love them. It's about health and wellbeing, it's about keeping London on the map despite the political mayhem driving us all to the brink.”

Is swimming in the Thames going to be safe and clean?

“The pool will be naturally filtered using the finest European water filtering technology. This will remove all the pathogens and silt. We’ll then heat the water to make it as safe and accessible as it possibly can be. Allas Sea Pool in Helsinki is very similar to what we’re trying to do. This has a heated and treated pool and the option to safely swim in harbour water.”

“Lidos are magical but if I’m out of London I prefer a river or the sea. I’ve obviously got a particularly sweet spot for floating lidos and have conquered Gothenburg and Helsinki so far. In June 2019 I’m heading to Basel for the Swim City exhibition at the Swiss Architecture Museum. I’ve heard there are some good swimming spots there. Zurich as the birthplace of Thames Baths has a big place in my heart and the river baths there are spectacular.”

Is it important for you as an architect to be green and look after the environment?

“80% of the carbon emissions associated with the built environment are from buildings in use. The majority of our work is the adaption or reuse of existing buildings or structures so we try particularly hard to minimise our footprint. Concrete is a huge problem in the construction industry globally and we work hard to consider other options when presented with the opportunity.”

What other projects are you working on?

“The practice continues to maintain a broad range of work. Having a diverse portfolio has led to some challenging commissions where we’ve had to learn quickly. It's something the practice thrives on, the ability to be nimble and draw from sometimes conflicting typologies. We’re currently completing a tiny arts education charity HQ in Margate, a couple of London private houses and two new houses in Brighton for a developer. Sport is in area we’re expanding following winning planning permission for an indoor cricket net in South London and starting work on the design of a new specialist cryotherapy centre too.”