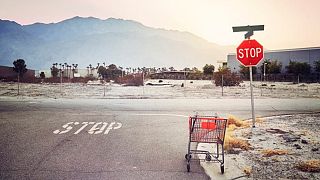 There’s no doubt about it: art, in its many forms, is so much more than a kind of self-expression. It can often be a force for good and much-needed change. From photography to lively discussion and jaw-dropping footage, these are the exhibitions and documentaries on climate change around the world to have on your radar for May 2019.

This exciting initiative is a month-long festival looking at the ways in which art can make a difference in the discussion around sustainability and climate change. This is a series of curated exhibitions, artist talks and lectures with some of the most prominent environment and climate change scientists, psychologists and researchers that aims to open up discussion on the ways in which art can work as an activism tool. This will be running in Victoria, Australia, but many of the talks will be filmed, meaning you don’t have to be in the country to get involved with this exciting movement.

When: Available from April 2019

If you’ve yet to watch this groundbreaking BBC documentary, now’s the time. Presented by the world’s most respected wildlife documentary maker, David Attenborough cuts through the fake news and confusing statistics to bring us the truth about what is actually happening to our environment. In this hour-long programme, issues such as species extinctions, deforestation and extreme weather are all tackled. Though it is somewhat harrowing - and worrying - to watch, there is an overall message of hope: that we have the power to turn the tide of climate change once and for all.

According to statistics, approximately 8 million pieces of plastic find their way into the ocean every day. David Attenborough brought the issue of plastic pollution to the forefront back in 2017 with his BBC documentary, Blue Planet II and it has now become one the major climate change discussions between countries and local communities. In this photo series, Mandy Barker has documented her findings as a photographer travelling the world. Combined with research notes, sketchbooks and scientific samples, it combines both art and

science to present a well-rounded exhibition that forces the viewer to confront the realities our oceans are facing.

Bringing together a collection of poignant photographs, works of art and other archived materials, the Museum of World Culture has curated an exhibition that explores the way human lives are directly affecting the planet. Looking at everything from the things we choose to repair and care for versus those we simply consume, as well as scientific results in environmental psychology, it’s a fascinating study of the relationship between people and the planet we call home. Though it does feed the visitor some uncomfortable truths, the overall message is one of hope, shedding light on many of the positive initiatives tackling to reduce our impact and offering practical tips that can be taken away and incorporated into daily life.

Photographers Yuri Kozyrev and Kadir van Lohuizen have won the Saatchi Gallery’s ninth Carmignac Photojournalism Award for their project on the Arctic. Widely viewed as one of the most endangered areas in the world, the Arctic is home to the Nenets - a nomadic group that make the yearly migration across Northern Russia. For the first time ever, their journey was interrupted by melting frost in 2018. Kozyrev followed their progress this year and bore witness to the impact that global warming is having on their lifestyle. Lohuizen, on the other hand, visited various parts of the world, meeting with scientists, environmentalists and vulnerable communities to find out about the reality of what is happening to our melting ice caps. Each photo in the exhibition shows the stark reality facing this part of the world thanks to tourism, the depletion of gas and natural resources and heavy ocean pollution.