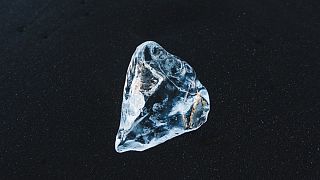 It’s claimed that lab diamonds could provide a sustainable solution to the unpredictable diamond trade, raising ethical standards and cutting out harmful mining practices. But how does it work? And do lab diamonds look as good as the mined variety? We find out.

Not only are the diamonds said to be identical to their mined counterparts, but they offer a sustainable solution to our sparkler habit if the lab itself works hard to maintain high ethical standards that is.

But how exactly are lab diamonds made? And are they as beautiful as mined diamonds? Jason D'Heureux, creative Director of leading ethical jeweller, Taylor & Hart, who offer customers the option to use lab-grown diamonds in their engagement ring collection, explains more.

“Lab-grown diamonds are made in laboratories using one of two methods: either by replicating the high pressure and high temperature (HPHT) found in the earth’s mantle where mined diamonds are formed, or by using superheated gas (CVD) to grow the diamond crystal.

As the lab grown diamonds aren’t pulled from the earth, sustainability is a happy off-shoot of the process. “The biggest benefits of lab-grown diamonds is access and environmental impact,” adds Jason.

“Lab-grown diamonds are more cost effective than their mined counterparts, thereby allowing more people to own a diamond. And if lab-grown diamond companies can offset their carbon footprint using renewable energy, this will greatly reduce their environmental impact.”

So far, so good, but as always with consumer products, there is an environmental footprint to be weighed up and it pays to get to know your jeweller to better understand what they’re doing to create positive impact.

“Lab-grown diamonds have some positive effects on the environment as they do not require large scale mining which does have an ecological impact,” says Jason.

“But lab-grown diamonds require an immense amount of energy to be produced, so they can leave a carbon footprint unless it’s offset by other methods like by using renewable energy.”

As the gems are relative newcomers to the jewel block, there are some considerations in terms of value. “We know that mined diamonds have historically increased in value every year,” explains Jason. “Lab-grown diamonds are still fairly new to the mass market and we don’t have enough data yet on how they will maintain or even increase in value in the future.” As well as this, there is a difference in perception too.

“A mined diamond takes millions of years to form in the earth’s mantle, undergoing extreme temperature and pressure on its journey to the surface.

Though the lab-formed diamonds may not have the history of mined gems, Jason thinks they’re coming on leaps and bounds in terms of their look and dazzle. “The quality has evolved considerably over the past five to 10 years,” he says.

“There’s more attention being paid to the finishing, that is the cut, polish, symmetry of the diamonds. It depends on the cut for all diamonds to achieve their maximum shine and brilliance. A lab-grown or mined diamond should be indistinguishable from each other if both have been cut to the same level of precision.”

So if you’re all set on using a lab-grown jewel in your piece, take heed of Jason’s advice and seek out a reputable specialist. “Take the time to research the companies offering lab grown diamonds.

“The quality of a jewellery piece is more than just where the diamond came from or how it was crafted. Ideally, look for companies with a long history of product and customer excellence.”