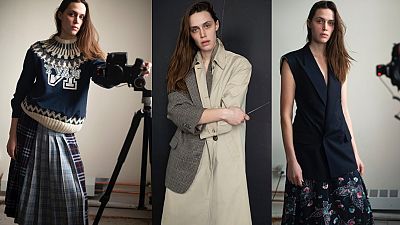 When Beatty’s womenswear label, Suno, closed down after eight years in 2016, she cast her mind to new projects. “I wanted to create something that was simultaneously interestingly, lovingly designed and sustainably made,” she says.

Beatty was at the Louise Bourgeois MoMA exhibition when she first came across the word ‘rentrayage’, French for ‘mending’. “Immediately the word struck me, it means to revive,” says Beatty. The name sums up her new vision and sustainable collection of vintage clothes and upcycled fabrics beautifully.

The first collection is entirely sustainable, made of vintage clothes and upcycled fabrics. Although Beatty admits she initially looked into getting fabrics from London, she preferred the idea of a fully American brand and so Rentrayage’s fabrics are made and sourced locally in Williamsburg, New York.

Erin Beatty’s new collection is inspired by a range of styles, artists and designers, from Louise Bourgeois to Maison Margiela and Comme des Garçons. “I am a quintessentially feminine designer. However I love a twist, which often comes with a masculine flair,” says Beatty. Indeed, the designer uses oversized blazers with darts and seams at the waist to give a feminine shape.

The founder says she would not describe Rentrayage as her ‘solo' project. “It is definitely my idea and I am the crazy pusher behind it, but I’ve surrounded myself with a number of incredible people that I had relationships with for a long time, so I don’t feel alone,” she says.

From her tailor, to her business partner and many more, Beatty surrounded herself with a key people in the fashion industry. She explains: “I think we were all looking for something different, and because I was able to provide that vision, they were willing to work for less than they would normally.”

With this 100% vintage collection, Beatty worked very closely with her tailor, Albert Torres, to select the garments that needed to be altered. When a piece felt dated, the team would strip it apart and find a way to refresh it. “It was interesting because if I tried something on and it felt very cool, we refused to cut it - because that meant it still had life in it,” says Beatty.

The collection is made of 30 to 35 unique upcycled pieces, using fabrics that no one wanted and were meant to be discarded.

The challenge of starting a new business venture

Beatty has grown a lot since her previous business venture, in particular she has learned to be totally authentic. “If I am going to do this with my clothing, I need to make sure that I do this with who I am as a person,” she explains. She emphasises that she needs to make sure that she is creating a business that feels sustainable to all of her employees. “There needs to be a thread of integrity that goes through all of it,” adds Beatty. “This was my idea and it is my responsibility to be true and consistent.”

“I think you have to really define what sustainability means to you and to relay that message to your customers,” she concludes.

“I don’t think it was challenging for me to figure out who I was on my own, I think it’s just scarier,” says the founder.

The designer is open about the hurdles of launching her new venture since Suno. She explains the way they are currently doing business - only creating unique vintage pieces - is not financially sustainable. “It is easy to be highly ambitious when you are first starting, and I don’t think we will always only be made of vintage clothes,” she adds.

The fashion industry should lead the change

According to the designer, the way we all currently live is not sustainable - just caring about sustainability is not enough - we need to take actions. “The population is growing too quickly and the earth is deteriorating too fast,” says Beatty. “When you think about it quite broadly, it is terrifying. But when you become a bit more solution-oriented about it, it can be quite hopeful.”

As a designer, Beatty tackles sustainability from a creative perspective and attempts to change the fashion industry through her vintage collection. “Certainly I want the people throughout the process to be treated well but my main focus is the environmental aspect of it, therefore creating less waste,” she explains.

Beatty also wants to explore how she can start teaching customers about why they should care. “Sometimes it feels there is so much wrong, you can’t do anything to fix it,” she explains. But she thinks the fashion industry should lead the change, “starting with the brilliant liberal open-minded people that make up [the] industry”.

On an individual level, the designer says she needs to take ownership for the irresponsible decisions that she might have made in the past and to start thinking on how to improve.

For her next collection, Beatty is considering launching a sustainable line, but not necessarily made 100% from vintage clothing. “Right now we are working on getting this collection in stores and to launch the website,” says Beatty. “But probably in a year or two, I would love to launch pieces that are easier to buy into, pieces that aren’t just one-of-a-kind.”

Rentrayage will be launching online in September 2019, and available at Browns, Ikram (Chicago), Capitol (Charlotte, NC and LA) and The Webster (NY).