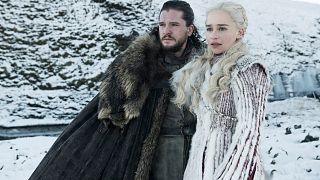 Game of Thrones has captivated audiences around the world, with its tales of betrayal and war, love and lust and an insatiable hunger for power. But, brace yourself, could the world of Westeros also deliver a powerful environmental message to those of us far beyond the seven kingdoms?

Here are five scenes which suggest Game of Thrones can do just that.

In Season 7, episode 3 Tyrion Lannister and Jon Snow discuss the psychological barrier of an issue that is too far away: the existence of what’s beyond the Wall. Jon asks the hand of the Queen at Dragonstone, “how do I convince people who don’t know me that an enemy they don’t believe in is coming to kill them all?”

Tyrion profoundly replies: “People’s minds aren’t made for problems that large. White Walkers, the Night King, Army of the Dead... it’s almost a relief to confront a comfortable familiar monster like my sister.”

Ring any bells? For some viewers, a mysterious but looming environmental catastrophe is just like the ominous threat behind the wall. As in this scene, how do you convince people who are utterly absorbed in the here and now of a reality they do not want to swallow.

In a few lines of dialogue, we hit an issue all too familiar to climate activists: people prefer to focus on the immediate problems closer to home.

Jon Snow shows Daenerys Targaryen that working together is the only answer:

During Jon’s visit to Dragonstone, where he seeks dragonglass to tackle the threat to come, he makes a significant discovery. Faintly illuminated by the light of his torch, carvings made by the Children of the Forest speak of a time when all had to unite to survive.

These crucial images illustrate that the Children and the First Men banded together, despite centuries of bloodshed, to fight the White Walkers. Jon Snow expresses to Daenerys Targaryen the urgency of fighting together to face the threat of winter and eternal doom.

If arch rivals can unite in the bloodthirsty world of Westeros, surely we could all work more closely to tackle the worsening climate crisis.

Jon Snow seeks solid evidence of what’s beyond the Wall

But strong words and cave illustrations aren’t enough on their own. In Season 7, episode 6 Jon Snow has to go to extreme lengths in order to find solid evidence to prove that the threat of the Night King is real and imminent to Cersei Lannister, the incumbent on the iron throne. Jon urges Cersei to forget her political ambitions, and to focus on what is really important: the fight against death itself.

Is GOT trying to tell us that we all need to reconsider our priorities? Like Jon, should we be doing more to convince the most powerful to look beyond their own self-interest?

What is the Wall keeping out?

Season 7 ended climactically with the Night King’s dragon bursting through the protective wall that had kept the people of Westeros safe for centuries. With the Wall breached, there is no barrier to hide behind. Civilisation must now stare death in the face.

Are we still living behind our own wall, in the hope that the distant threat doesn’t break through? Are we protecting our natural defences, our own walls, like the Ozone Layer? Game of Thrones could be seen to issue a powerful warning of what could happen if we don’t act now.

*SPOILER ALERT* The Long Night - there is hope!

Season 8, episode 3, The Long Night is the longest battle scene in the history of television and depicted the battle between the living and the dead at Winterfell. The Army of the Living fought bravely as the Night King and the Army of the dead descended on the castle.

Sansa, whilst hiding in the crypt during the battle said to Tyrion Lannister, “it’s the most heroic thing we can do now, look truth in the face” which speaks volumes as they are all faced with a desperately brutal situation. However, hope is not lost! The Living joined forces and Arya Stark saved the day with the slick strike of a dagger in the Night King which leaves us asking ourselves: can we overcome the fate of climate change by facing the truth and acting on it together? The episode made us all breathe a sigh of relief and calm has been restored, for now.

Homeless bats nursed back to health by volunteers