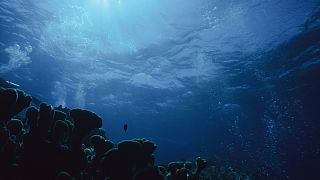 Imagine the luxury of being allowed to explore a pristine strip of sea just because you're a scuba diver and can access a protected marine park restricted to everyone else. It’s a matchless experience that makes you value even more the beauty of uncontaminated nature and understand why saving our oceans is vital.

Santo Stefano, a former prison isle off Rome's coast, is the diving mecca of the Tyrrhenian Sea. What makes it unique is that this mesmerising jet-black uninhabited atoll is part of an integral natural reserve, meaning only swimmers, divers and snorkelers are allowed to access and bathe in its precious waters and admire the incredible multifarious seabed. Not even sailing boats can pass close to it, let alone drop the anchor. Coast guard patrols will immediately chase and fine you. Italy has many natural reserves but only a handful actually enforce strict, controlled access.

Myth has it this is where wandering Greek hero Odysseus on his way back home from burning Troy was bewitched by the wicked Sirens songs, who were not lovely mermaids but ugly half-bird, half-woman creatures believed to live on the isle. Santo Stefano does indeed have a magnetic pull, despite it was used as a prison isle from the Roman age up until the 1960’s. Spooky ruins of an old jail fortress still stand.

The atoll, of volcanic origin, features funny-shaped sea rocks resembling falcon heads and witch noses while the interior is covered in a lush fluorescent green vegetation of palms and exotic flowers. The water is of an incredible emerald colour. But wait till you dive and go under, a whole new universe opens up. There are canyons of grottos dotted with bright sea anemones and purple corals, huge fan mussels and second world war wrecks inhabited by moray eels.

The Molara reef is one of the best dives. You'll be swimming with giant brown and red groupers above peculiar rectangular rocks shaped like molar teeth (hence the name 'Molara') at a relatively shallow depth of 20 meters. The most exciting part is when the rocks give way to a huge white sand bed surrounded by Posidonia plants where dozens of friendly barracudas twirl around you.

There are bits and pieces of ancient Roman amphorae and anchors covered in algae, sea urchins and star fishes. The most exclusive diving spot however is Molo 4, an old docking rocky cove where prisoners got off to walk up to the overhanging jail. The cliff dive here gets as deep as 35 meters, leading to an incredible, unique white coral.

Your scuba day can get even more adventurous and transgressive. One side of Santo Stefano is totally off-limits, even for divers. Actually, for anyone who approaches with a boat, except the coast patrols. It's because this part of the isle features the ruins of an ancient Roman bath carved out of the volcanic rocks into little natural jacuzzi pools.

Consuls and aristocrats would skinny-dip inside these little craters, waiting for the waves to wash in and give them a nice hydro massage to legs and torso. The tides power was the first kind of clean energy used by my ancestors, also for pampering.

But in low season, during spring and autumn, coastal authorities may occasionally close an eye allowing small diving dinghies to pass by, but not stop. So divers must prepare to jump backwards in a somersault off the boat while it is still moving, which does require some skills but gives an incredible adrenaline rush. Then once underwater they can swim right inside the integral protected zone.

The hard task is rewarded by the thrill of diving in the ‘big blue’, as divers affectionately call the privilege of diving in spots where boats never sail by and there are no human traces. The water is ‘virgin’, untouched. There are no sounds of motorboats, no oily leaks from engines, zero rubbish. Not even a single, tiny candy wrap can be spotted floating, nor a fishing hook or net which are often hidden below the sea surface to capture fish. It’s like diving in a primitive broth brimming with marine life. After all, we need to realise that the sea is like a jewel box that needs to be cherished and taken care of.