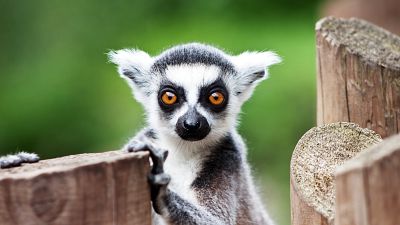 Copyright  Photo by Stephen Hickman on Unsplash
By Doloresz Katanich  with AP  •  Updated: 27/02/2022

Lemurs have a lot to teach us about connecting to nature, that is the idea behind the lemur yoga or 'lemoga' classes, a new service launched in a Lake District hotel and spa in the UK called Armathwaite Hall.

Its aim is to encourage more people to spend time in nature while raising awareness of conservation and the plight of Lemurs in the wild. The idea was inspired by the animals themselves, as they tend to do some form of yoga poses in their everyday lives.

"It was dreamt up by the girls at the spa I think. They had seen a lemur sat in what they considered to be a lotus pose," said the manager of Lake District Wildlife Park Richard Robinson.

It is proven that spending time with animals is good for people's health. However, to practise yoga with these animals, one needs to react well to curious primates jumping on their necks. "You need to be not afraid that an animal might come to sit on you. What we're looking for is people who are wanting to be at one with nature and be at one with wildlife," added the manager.

These endangered Madagascan ring-tailed lemurs have been living in the Lake District Wildlife Park in the north of England for the past 20 years. Lemur encounters have been already a part of the park's educational and fundraising programme for several years.

Click on the video to learn more about lemoga.