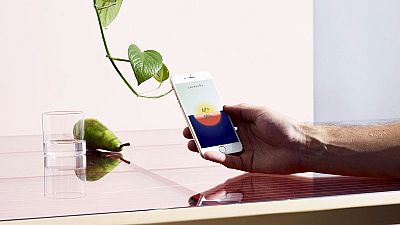 Terracotta-hued teapots made from once-toxic waste, natural table lamps grown from fungi and solar-powered windows capable of charging electronics – the era of eco-friendly interior design innovation has arrived, and creatives from around the world are making beautiful and sustainable products pushing the edge of sustainability.

Amsterdam-based designer Teresa van Dongen has developed a light source capable of powering itself completely with electricity generated by living microorganisms. Working alongside Ghent University, van Dongen created a “bacteria battery” filled with electrochemically active "geobacters" from the soil of rivers and lakes which emit small electrical currents in their metabolism as a waste product. To build Electric Life, van Dongen created a bespoke electrode that harvests the electrons excreted by the bacteria, which are then guided through an electrical circuit that is used to generate electricity. To keep running, the light requires a shot of water and vinegar once a week.

Award-winning Dutch solar designer Marjan van Aubel creates innovative products spanning the fields of sustainability, design and technology. The Current Window, created by van Aubel in collaboration with graphic designer Marine Duroselle, is made of solar cells that harvest the sun’s energy and convert it into electricity to charge small electronics.

While the window’s colourful panels are reminiscent of stained glass, they are made from organically dyed solar cells which cover tiny particles of titanium dioxide capable of converting solar energy into electrical current. The cells are held between two toughened glass panes and connected to a battery contained within a frame featuring USB charging points for electronics such as cell phones or laptops.

Mycelium, a thread-like structure formed naturally by fungi, is quickly becoming a favoured natural alternative to synthetic materials for eco-conscious furniture makers, and London-based designers Sebastian Cox and Ninela Ivanova have used mushroom mycelium to create a series of stools and lamps with a suede-like texture.

The collection, Mycelium + Timber, is hand-made from scrap willow wood from Cox's own woodland, which was cut into strips and woven together to create individual moulds. Inside the moulds, the designers grew a type of fungus called fomes fomentarius, cultivated from the scrap wood, which they transformed into lampshades. The pieces mimic the natural symbiosis the materials have in nature, and provide a natural alternative to the glue commonly used in engineered wood products.

Oslo-based international design studio Snøhetta has created a chair made of materials recycled from local ﬁsh farming companies in northern Norway that produce large amounts of waste. Produced in collaboration with manufacturer Nordic Comfort Products, the body of the S-1500 is created from discarded ﬁsh nets, ropes and pipes left over from their operations, which are processed and ground into a granulate substance that can then be injected into a mould, while the subframe is made from repurposed steel. A beautiful green hue gives the piece the look of marble while being 100% sustainably made.

From Wasteland to Living Room

Guillermo Whittembury, Joris Olde-Rikkert, Kevin Rouff and Luis Paco Bockelmann – four designers from London’s Royal College of Art – have recycled the toxic red mud from aluminium production into a collection of ceramic tableware pieces. The cups, bowls, plates, vessels and teapots make use of the industrial waste that is otherwise left unused in pits around the world. The group hopes the collection, called From Wasteland to Living Room, raises awareness about the potential of secondary material use and encourages a more circular economy.

The Current Table 2.0, developed by Marjan van Aubel under her design practice Caventou and in collaboration with design and engineering studio Peter Krige, is built with integrated solar cells which use the property of colour to create an electrical current.

The table charges electronics wirelessly from its surface, while an accompanying app can tell users how much solar energy has been stored. According to Caventou’s website, “the dye-sensitised solar cells also work in diffuse light, making it the first piece of furniture to harvest energy indoors.” The table was nominated for London Design Museum’s prestigious Design of the Year Award and is now part of the permanent collection at Boijmans van Beuningen in Rotterdam.