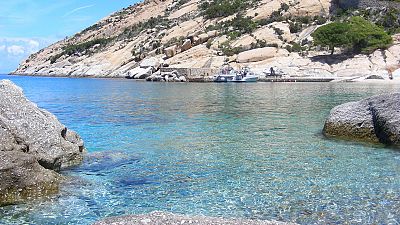 “Hey look, over there, dolphins!”, yells a kid sitting next to me on the ferry boat from mainland Tuscany to off-beat Capraia island, dotted with ancient pirate look-out towers and solitary inlets. I stare at the blue shimmering sea and grasp dozens of dolphins and baby whales jumping out of the water, splashing around saying "hello" to passengers.

This is the best way to start my island-hopping tour of the secluded Cetacean Sanctuary, a wide protected natural reserve stretching from north-west Italy to south France, comprising the Tuscan archipelago’s seven islands and Corsica.

The underwater world also brims with friendly barracudas, endangered loggerhead turtles and giant groupers, weighing up to 50 kilos. The first time I find myself staring into the eyes of a huge brownish white-dotted one with scary lips I almost have a panic attack. Capraia’s Cerniopoli, or Groupers Citadel, is a top attraction accessible only to professional divers. Due to the multifarious marine life and many reproduction sites, the sanctuary grants access to a restricted number of privileged tourists longing to suntan on its almost off-limits islands.

The most eco-conscious paradise atoll of all is Montecristo, where even swimming in the pristine, tropical-like waters is banned. Landing here is a luxury. The isle that inspired Alexander Dumas’s Count of Monte Cristo novel is nearly impossible to reach: each year only a few dozens lucky tourists are admitted solely for day tours, and you need to apply months before as waiting lists are longer than for the Pope's Vatican hearings. The fragile biogenetic ecosystem is protected by Italy’s state and the European Union like a precious jewel. It’s the lair of endangered bird species that are trying to reproduce and of beautiful plants found nowhere else.

How to safeguard fragile habitats

Coastguard patrols escort you there on fast-speed boats and only authorised guides can take you on trekking tours, giving awareness lessons on how to safeguard fragile habitats. A bunch of wild goats and a few monk seals can be spotted. If you get caught stomping on the wild Mediterranean bush, fishing with a simple rod or picking souvenir shells, you’re fined. Sailing boats aren't even allowed to pass nearby, let alone drop the anchor.

Montecristo’s sole inhabitants are the guardian and his wife who live in a beach hut with no modern comforts. It’s a chance to live an exclusive, Robinson Crusoe castaway experience in an earthly paradise. This gorgeous white granite mountain that rises out of the sea inspires a sense of awe in people when they first land. You can’t help but worship the uncontaminated nature.

A similar primitive vibe can be felt on nearby Giannutri isle, shaped like a crescent moon, where a limited number of tourists are allowed to spend the night in tiny studios for short, unplugged stays. The first time I scuba dive there I’m struck by the dark rugged cliffs, sea grottos and sudden nasty currents that make the isle all the more hard to reach. Solitary sunbathers lie naked on rocks, lulled by the waves’ sound.

Spellbinding Pianosa and Gorgona isles are also off-the-beaten track, albeit for other reasons. They’re the only two still functioning prison isles in Italy where inmates on probation kill time greeting visitors and growing biological orchards and vineyards. So before you are granted access, the Justice Ministry needs to clear and green-light your request.

Pianosa, covered in pink fossils and stage to a mesmerising ‘barracuda dance’ each night in the harbour’s waters, is renown for its bright butterflies. Snorkelling and scuba diving are allowed but just in certain areas and with authorised guides who also take visitors on mountain bike and horseback rides. There’s one picturesque hotel restaurant ran by supervised convicts overlooking a white baby powder beach.

Capraia is the farthest island, at a stone’s throw from Corsica. The volcanic origins can be seen in its reddish Mars-like cliffs, dotted with spooky abandoned dungeons covered in colourful flowers. A single road connects the port to a medieval pastel-coloured village clustered around an ancient fort, once locals’ shelter during pirate raids. The best way to explore is by boat, especially at sunset, or along the many trekking routes.

The great thing about discovering the Cetacean Sanctuary is that even holidaymakers are encouraged to take part in its preservation. While island-hopping on ferry boats or private dinghies (where allowed), if you ever do spot dolphins, turtles or whales it’s best to shoot a photo and alert authorities for easy monitoring. Here, eco-conscious awareness never goes to sleep, not even on vacation.