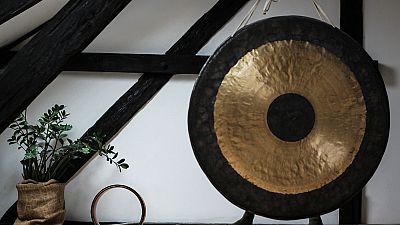 The solution to any trial in my life is a bath. There’s nothing more reassuring than submerging myself in a steaming tub, candle flickers and soothing scents mingling with the steam around me. So upon discovering that Londoners were ditching water and instead bathing in the sounds of gongs for therapeutic benefits, I wanted in on the action.

The setting for my first gong bath session is a familiar one – an airy room strewn with yoga mats at a studio in an old warehouse in South East London. Less usual though are the huge metallic discs suspended at the front of the room, glistening in tones of beaten copper, gold and black. A bearded man sits zen-like in the lotus position at their base, rhythmically pumping a boxy accordion. It emits strange humming tones that offer a ceremonial air to the occasion.

We begin with some kriyas, which are breath exercises that prepare the body for deep meditation. Next we set positive intentions and then lie snuggled under a blanket in anticipation of the experience ahead.

Suddenly my entire consciousness is thrumming with a sound that feels incredibly close and subtle yet also vast and distant. Like holding your ear to a conch shell and hearing the waves of all the earth’s oceans breaking simultaneously. It’s more sensation than sound, an immersive ripple of energy passing through my body and sending tingles undulating from crown to toe.

From that point on, time seems immeasurable and irrelevant. I’m suspended between sleep and wake in a heightened state of consciousness that’s effortless to maintain. Surely this is what transcendence feels like, or lucid dreaming perhaps. Visions of my friends and family enter my head. An idea for a creative project I’m working on materialises suddenly. As the last remnants of sound wash away, I’m overcome with a sense of deep calm and gratitude – a refreshing perspective that’s all too often elusive in my busy life.

A method of healing

Gong meditations have been around for thousands of years as a method of healing. Along with quieting the mind’s chatter and relieving stress, this form of sound therapy can help with anxiety, depression, trauma, pain management and chemotherapy support. “It’s a modality that bends itself to the person in the room, so it can technically help everybody,” gong master Leo Cosendai, who led our session, tells me.

Cosendai discovered the powerful benefits of sound bathing after suffering from acute anxiety and panic attacks for many years. “I was rooted in a state of dis-ease. The lack of progress I was making opened me up to a whole array of practices which didn't cut the mustard,” he reveals. “Fortunately, after much time seeking what would help, my wife took me to my first gong bath. It was a total revelation. So much so that I ended up purchasing a gong three weeks later.”

But how does it work? “Humans have evolved to respond to sound in certain ways, it’s linked to our survival as a species,” explains Lyz Cooper, founder of The British Academy of Sound Therapy. “With advances in neuroscience we are able to see into the brain to find out how sound affects us. Our research has shown that playing certain instruments, pitches, rhythms in certain ways helps improve health and wellbeing.”

Effect of sound on the mind and body

“Sound has a tremendous effect on the mind and body – it's almost like we were designed to absorb it physically and process it mentally,” Cosendai says. “Our bones are wonderful vibration transducers and we are made of over 60% water, which after having seen Emoto's work will leave most people amazed at what can go on in our body when we bathe in sound.”

He references the work of Japanese doctor Masaru Emoto, who claims that sound and human intent can affect the molecular structure of water. His experiments involved freezing water that had been exposed to different words, pictures and music, and then examining the ice crystals under a microscope. The water exposed to positive speech and relaxing sounds formed harmonious geometric crystals, while that exposed to negative intention and unpleasant sounds resulted in ugly, disorderly crystals.

It’s a theory that’s backed by numerous cymatics experiments on YouTube. These allow sound to be made visible – for example by sending its vibrations across a surface sprinkled with fine dust and observing the resultant patterns. “They really give you an idea of the geometry and shape of sound. It's absolutely beautiful and mind blowing at the same time,” Cosendai remarks.

It creates a compelling image of what’s happened inside me. I imagine all the water contained in my body vibrating in perfect molecular formation, thanks to our positive intention setting and the beautiful immersive tones of the gongs.

While I wouldn’t trade in my faithful water bath, it’s sound I’ll sink into if an internal cleanse is what I need.