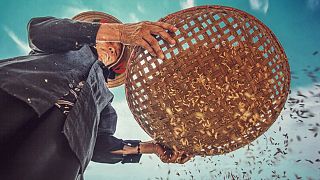 When we sat down for a one-on-one interview with Philippe Madec last December, the French architect shared his vision that in the twenty-first century, architecture would reinvent itself thanks to bio-based and geo-sourced materials such as hemp or earth.

A vital evolution knowing that buildings produce 40% of greenhouse gas emissions over the world.

Among the numerous positive innovations likely to give him - and us - reasons for hope, we could definitely mention what’s happening now with rice husk. A material all the more positive, as its almost unbelievable abilities don't apply only to the construction industry.

Until recently, rice husk (the envelope that protects the seed during its growth) was much more part of the problem than the solution for rice farmers. Too hard to feed cattle, too dirty to be burnt in a fireplace, it used to be purely and solely burnt in the open air, contributing to release great amount of CO2 in the atmosphere.

Things started to change a few years ago. In Camargue, a swampy region of southern France historically used for rice cultivation, construction companies started to use rice husk to insulate houses. Full of opaline silica, rice husk indeed has the advantage of offering a good humidity and fire resistance, as well as it is rot-resistant and repels parasites.

Once it’s cleaned up, it becomes a high-quality insulating material, allowing houses to keep a homogeneous temperature in both summer and winter, with an energy consumption close to zero. All this while giving a welcome additional source of income for rice farmers.

But that’s not all: not only does rice husk prevent air pollution, it also saves a lot of embodied energy, for it needs 3 to 8 times less energy than fibreglass to be transformed. It also can be composted at the end of its life cycle, becoming an organic fertilizer while saving a large part of the rubbish usually produced to build a house. Definitely a good choice, considering that rice husk has become the cheapest ecological insulating materials, a distinguishing feature which used to be straw’s attribute.

Thanks to its low price, rice husk is now used in the Philippines to build low-cost houses, a solution all the more economical as its resistance to parasites and termites allows to increase buildings lifespan. Inspired by the use of rice husk in Asia, an Italian society built “Gaia” in 2018, a 3D-printed house made out of a mix of earth, rice straw, rice husk and lime.

As a result, a house that only cost €900 to build (excluding labour), raising hopes of a solution for the million people poorly-housed around the world.

Rice husk numerous advantages are seriously starting to make waves. In the US, the Massachusetts Institute of Technology (MIT) awarded as soon as 2009 a start-up which used rice husk to sheath refrigerator in renewable rice, an insulation material 8 times more efficient than petroleum-based products.

Rice-husk based materials are also becoming a viable replacement to hardwoods for outdoor flooring, cladding and fencing, in this way contributing to save exotic hardwoods such as teak and to prevent deforestation.

Last but not least, a few companies now propose almost entirely biodegradable travel cups made out of rice husk.

A good way to make a difference at our own level while enjoying our coffee!