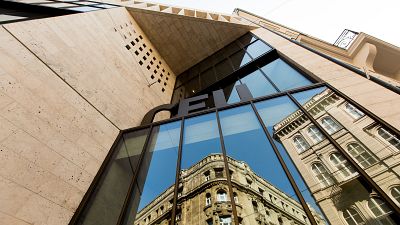 Can a university’s campus building promote sustainability and care for the environment while also being an architectural marvel? Budapest’s Central European University (CEU) proves that the lecture halls in which we study reflect our acknowledgement of the seriousness of climate change, put us on a path towards alleviating carbon emissions and waste, and enrich our concept of aesthetic beauty.

Two of the campus’ buildings – the Nador 15 and the Nador 13 – have been BREEAM certified. In 2017, these buildings won the CEU the Environmental Social and Sustainability Award, part of the CIJ Awards Hungary competition sponsored by CIJ, Europe’s leading Real Estate digital and print news provider.

Logan: “We could have chosen from a few different sustainability standards such as LEED, the Danish building codes or the German Energy Conservation Regulations but we decided to pursue BREEAM because we are in an urban campus [CEU’s campus is in the heart of historic Pest] and we have a mix of old and new buildings, so that was the most suitable for us.”

Tamara: “While there was interest in supporting green building features, BREEAM certification was not a given at first. CEU considered the evidence and was convinced of the importance and value of having certification to reflect the rigor in its commitment to sustainability and its prominent role in academic excellence as well. The certification was also an important gauge that could assure the educational, environmental and economic benefits based on specific and reputable standards and criteria. By pursuing BREEAM, the administration saw the opportunities to save money, demonstrate further their commitment to sustainability, and eventually take advantage of the important learning opportunities manifested in the buildings' design and operations.”

The path to BREEAM

Logan: “In 2009, the university signed a sustainable development policy but without the tools to do anything, it was mostly a nicely worded document. So when in 2012-2013, the university decided to kick off a redevelopment project it was decided that it was in everyone’s interest to design an efficient building. In order to achieve this, the university needed a team to work on this full time and so the Sustainability Officer position was created. The first item on my agenda was to persuade the administration to pursue BREEAM because it would show that we’re taking steps outside of ‘business as usual’ and taking sustainability seriously. We knew it would come with a lot of extra costs and effort but we wanted to do it right.”

Tamara: “In terms of the environmental impacts, the campus before was not as energy and water efficient; access to recycling bins and filtered water was limited; and the Japanese Garden was not as ecologically friendly as the N15 rooftop. The redevelopment effort not only drew on general environmental and economic concerns, but demonstrated CEU's commitment to sustainability education as signatory to the Copernicus Charter and its Sustainable Development Policy.”

Logan: “At the time, there were a few contractors here in Budapest who were familiar with BRE and LEED because a few banks and private companies had already been certified in Hungary. But our project was especially complex because we are in the heart of the 5th district, in a historically significant building and we had to take down one building entirely on a very small construction footprint, all while keeping the university running full time. Getting the BREEAM certification takes a long time and requires a lot of documentation, which can get quite complicated because the inspection is very rigorous and thorough – as it should be, of course. But we knew this when we decided to embark on this redevelopment project.”

Tamara: “The new BREEAM certified buildings reflect CEU's own character as an innovative, visionary place of learning and research with concrete (literally and figuratively!) impact. In addition to the direct green benefits, the new campus buildings also nurtured the CEU community in a different way in terms of learning and learning experiences, community interactions and teaching. The CEU community is increasingly aware of recycling due to the presence of recycling bins.

Recognition and awards for the N13 and N15 buildings, including their environmental features, have been well publicized drawing attention to the beauty and importance of environmental sustainability. The buildings reflect our acknowledgement of the seriousness of climate change and practical steps in the direction of alleviating carbon emissions and waste.”

Logan: “Was it all worth it? Yes! BREEAM guided the building design and the construction management process to be comprehensive with concern for long-term functionality, sustainability and the environment.”

Tamara: “One of the features of the new buildings that I really like are the old bricks that were reused from the previous building. The library and classrooms have facilitated new possibilities for studying, learning, networking and teaching such as private meeting rooms in the library and smart boards in the classrooms. Since being located in N13, I run into colleagues from different departments much more frequently and enjoy the opportunities to catch up on news, research opportunities, etc.”

Logan: “What is truly unique about the new campus is the roof garden. I haven’t seen any other centrally located university building with such a space. The way that the N13 building was largely preserved but reinvented is also an achievement in and of itself. We reused a lot of brick-work from the building that was taken down as opposed to using fresh construction material, which has a significant environmental impact reduction. Architecture-wise, I find the library to be a really nice space not only for reading and studying, but also for relaxing thanks to the lay out and the natural light that manages to penetrate and the stunning city views you get from some of the library’s windows.

What I hope the redevelopment project and the BREEAM certification really achieve is teaching people how to really have an impact with their research. You’re not done once the building is built. We have an environmental sciences department here at CEU which actively engages with environmental social movements in Budapest, Hungary’s regions and the Central European region as a whole. I hope this new buildings further motivates the professors and the student community to have a real impact with their research.”

Although at present there is still some uncertainty regarding CEU’s status in Hungary due to long-running political tensions, the university retains accreditation as a Hungarian university and will seek to continue teaching and research activity in Budapest as long as possible.