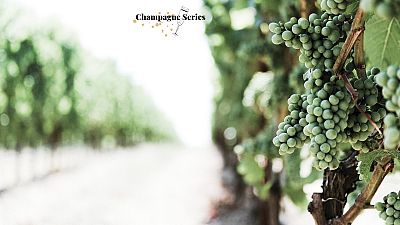 It’s 9.15am on a surprisingly chilly September morning, considering this has been one of Europe’s hottest summers on record. A worrying upward trend in global temperatures has resulted in a bumper crop for the Vignerons of Champagne, with growers from small, single vineyard businesses to goliaths such as Moët & Chandon or Bollinger all reaping the rewards of a long harvest - and a potential reward in the years to come through particularly delicious wines.

The uniquely fruitful year has also resulted in extra attention on the Maisons, including Taittinger, one of the region’s big hitters. Having been sold in the early 2000s, the family business was bought back by Pierre-Emmanuel Taittinger, helped by his son, François, and his daughter, Vitalie - the woman I’m here to see today.

By 9.30, Vitalie has taken part in a photoshoot, organised meetings for the next month, and kindly made me a coffee. There’s also the small matter of getting her three children ready for school. Our interview starts at 9.45, after she’s taken aside for some final photographs.

“Unfortunately there’s no official secret to keeping work and family life in good health,” she tells me after settling down in Taittinger HQ’s plush drawing room. “Sometimes it’s very hard, but I try to be available for my family as much as I can.”

Another phone call. An apology, followed by a quick email.

“OK. So now you see!” she says, taking her first sip of coffee.

I ask her whether she ever switches her phone off. “Never, but during the weekend I really try to lay it on the table. It’s a hard balance to find. I would like to spend more time with my family, but sometimes you have a busy period and you have to be there.

“A lot of people are visiting, journalists (cue a meaningful stare in my direction), good customers etc., and you have that in addition to your office work, which doesn’t disappear. But everything is beautiful.”

The conversation moves to her children, something which seems strange to be asking the marketing director of one of Champagne’s biggest houses. Does she have more of these questions directed at her because she’s a woman? “Yes, of course. I think the position of women in champagne and women in society in general is the same. I think a lot of women are now in very good positions in companies, and are also leaders, so it’s a very interesting time for a woman. But there are still differences in the treatment we have, or in the way people give you credit - or not.

“Sometimes, it’s not the same. But I don’t care, because I don’t think it’s a question of being a woman or a man. The question is, what is your mission for the company you work for, and how can you serve this company the best?”

Veuve Clicquot: the first woman to run a champagne house

Her position would raise a smile from the original ‘women of champagne’, the spiritual mothers of not only those women in champagne today, but the modern industry itself. Two of those charismatic women are perhaps the most famous. Hearing the name Veuve Clicquot might not mean anything to non-francophones besides quality champagne, but the English translation is, in fact, ‘Widow Clicquot’, after Barbe-Nicole Ponsardin. Barbe-Nicole took on her husband François Clicquot’s business in 1805 after his death from typhoid at the age of 30, becoming at 27 the first woman to run a champagne house, and establishing it as one of the finest.

Over a century later, Emily Law de Lauriston Boubers, better known as Lily Bollinger, took over another fêted house in 1941, once again after the death of her husband, Jacques. This began an explosion of interest, not only in Bollinger but in champagne, as Lily travelled the world extolling the virtues of the bubbly stuff. Her most famous quote is perhaps the greatest homage to drink ever uttered:

Laurent Perrier, Veuve Fourny, Veuve Doussot: the list goes on. This band of female leaders in champagne certainly has a strong heritage, but is a tiny group in comparison to the thousands of male owners in the region. Vitalie Taittinger is perhaps correct in saying that too much of a focus is placed on the women of the past: “We are always talking about the past, but what is happening in the present is interesting too. They [the women of LA Transmission] are all doing wonderful things for champagne.”

Founded in 2016 by a group of women at the top of the industry - including Anne Malassagne of AR Lenoble and Evelyne Roques-Boizel of Boizel - the ten-strong LA Transmission’s aim is not to promote only the champagnes represented in the group, but all champagne - with a focus on attracting more women into the industry. Future events include a tasting in Paris with students of wine clubs across the capital, and a conference focussing on American women in the trade.

“What we want is to promote champagne as champagne, and also to promote women in champagne,” Evelyne emphasises as we sit down at her Maison on the Avenue de Champagne in Épernay. “Yes, there are more women, but at the head of the houses, not many. What has improved is that you have more women everywhere. The problem always is that as in all jobs, women don’t ask for the power.”

Is it then a matter of encouraging women to reach for the top positions? “When you look at all the companies, the heads of the big departments, you have more men than women everywhere.

One of champagne’s foremost female voices

Evelyne started in champagne early, returning to help her mother after the sudden death of her father and brother in 1972, and is seen as one of champagne’s foremost female voices. She has certainly taken on the spirit of her house, changing her profession and leading from the front for more than 45 years. Vitalie Taittinger was effusive in her praise: “She has something which is very rare, she has led her company with a kind of sweet power. She is very calm, she never tried to be a man, and I love that.

“I love those kind of women. They totally are what they are, they don’t try to imitate men, but they add something, an additional spirit, and I think for the company it’s something very precious.”

There is a special air about Evelyne as we sit down for my first tasting of the day, a mid-morning uplifter. A curious mix of the pragmatic and romantic is probably what has seen her become an important influence on the direction of the region. We move swiftly from proselytising Boizel’s premium Blanc de Blancs to the differences between the sexes when it comes to the senses.

“Women speak more about smells than men. When you see a mother with a baby, the mother always has her nose in the hair, just smelling. When you speak about holidays for instance, the man will speak more with his eyes than with smells. It’s just different.

“It’s about expression. You have men who are very talkative, but more women who are easily talkative, I think! Women speak more about their emotions, and smelling and tasting is emotional. It has to be emotional!

“Once you have interest however, men and women are the same, because one of the pleasures is to smell, and everybody who loves wine smells it. Then, you are on the same level. I think men and women have exactly the same capacity.”