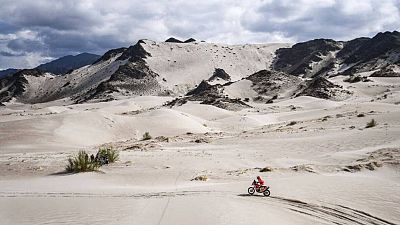 Motor sport has many gruelling challenges, but there is still one occasion that stands out on the calendar as the most brutal for man and machine: the Dakar Rally. As the name suggests, this event started out as a dash from Paris to Dakar through the deserts of West Africa – until the security risks in Mauritania were deemed too severe in 2008. Now it has switched to the deserts of South America.

After recent jaunts through Argentina and Chile, the 2019 Dakar Rally will take place entirely in Peru from January 6-17. But its status persists as the ultimate marathon for petrolheads through the world’s most unforgiving terrain.

“Imagine running a World Rally Championship season in two weeks,” says American challenger Robby Gordon. “You never know what’s on the other side of every rise or every corner. There could be a surprise; it could be a 50-foot drop or a cow in the road. It could be local traffic reversing across the road trying to make it back to the farmhouse. It’s not just the driving but the mechanical side. There are no radios and no truck support so you’ve got to be ready for anything…”

Gordon has been a Dakar regular since 2005, and he is well known for his aggressive approach – taking on all these unknowns head-on. But perhaps this is one event where prudence pays off; he has yet to come away with the overall victory.

He’s in good company: nine-time World Rally Champion Sébastien Loeb returns in January for his fourth attempt, but he admits he hasn’t yet tamed the Dakar either. “To push hard and be on the limit I need to feel good with the car,” he says. “It happened a lot in world championship rallies, but not yet at the Dakar. You don’t know the roads, the car is very big and heavy and you cannot put it exactly where you want.”

The mental side of sport

There are separate categories for cars, trucks, quad bikes and motorcycles – and some Dakar greats have succeeded both on two wheels and four. Spain’s Nani Roma sealed glory in a car in 2014 to add to his win a decade earlier on a motorbike. Each triumph came at his ninth attempt. After over 20 years in such a punishing environment he has now learned to take the mental side of this sport very seriously.

“When you finish a stage on a bike your muscles are finished,” says Roma. “In the car I have more time because my co-driver deals with the rulebook and the navigation, so I only need to drive. But there are still challenges from the extremes of temperature, and the hardest thing is staying focused for such long days. If a stage ever seems easy your mind can wander. That’s when you can make a mistake. So when my head is a bit off, I move my left hand and hit the steering wheel to act as a trigger. That means ‘I must focus.’ It’s not just technical, it’s also in the mind.”

Roma is one of many drivers to have worked with a sports psychologist – indeed his ‘trigger’ is commonly used in Neuro-Linguistic Programming (NLP). Over the years he has also learned to put his mistakes behind him and not get ‘fired up’ with himself when they do inevitably come. No one goes through the Dakar epic without making a single error, but if you make fewer errors than anyone else the payoff is unmatched…

“You’re completely on your own 12 hours a day, so you only have your own mind to battle with,” says Britain’s Sam Sunderland, winner of the motorcycle event in 2017. “In a short race you put your brain in a box at the start and you get in the Zone, but at the Dakar so many things happen you have to adapt. Add in the five hours sleep night after night and the fatigue snowballs.

“I learned only by making mistakes, getting lost, having crashes and injuring myself. Then I realised fighting every situation might not be the best thing to do. If you’re lost you have to switch off and think ‘like a normal person’ for a moment. As a racer you never want to slow down because it feels like you’re losing time. But in hindsight you can gain by finding the right way. Still, to keep having to not ride too hard makes me more tired than just saying, ‘I’m all in.’

“When I finally won Dakar, it was six years of injuries, setbacks and sacrifices – so to get it done at last was so emotional and a massive relief. Now it’s back to work: let’s win it again…”