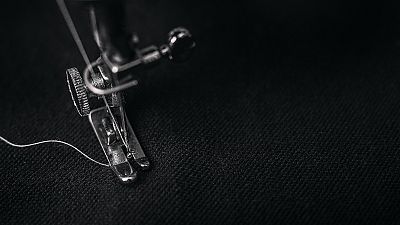 Maria Udrea is sewing a piece of clothing at a machine. This job, she has held it for 42 years. “We used to work only for exports. One unit worked for the Soviet Union, one for Italy and another one for the UK,” she recalls. We are at Faberrom, one of the biggest garment business in Romania located in a converted industrial plant in Bucharest, which used to be known as APACA.

Twenty thousand workers used to work here. 1380 people in her section alone (clothing and knitwear). Following the fall of communism, APACA was privatized like most state-owned companies, and reborn as Faberrom in 1991. Today, less than 200 people work in the textile department, sewing pieces of garments for prominent luxury brands from the West.

Romania in the global garment market

At 59, Maria Udrea is now Chief of the Confectionery section at Faberrom. “It takes approximately 8 hours for a suit comprising a jacket and trousers to be completed” she describes, “and thirty different people are going to work on it.” she adds. Efficiency, long-learned skills and relatively cheap costs make Romania particularly attractive.

“Today, we cannot say that we are very cheap compared to the global garment market. However, we offer high quality craftsmanship and proximity to the main European markets, which means that we are able to deliver an order within a week. This would not be possible for a garment produced in Asia,” explains Daniela Schoppmeyer, Faberrom General Manager.

“Since 2007, when Romania joined the European Union, we’ve seen our clientele has changed and we are now attracting top luxury brands.” she says. “Our production has switched from large quantities to medium or low quantity but higher quality.” she adds. In fact, the production dropped from 7000 products made per day to only 350.

Alina Rachieru, country coordinator for Fashion Revolution in Romania, a global movement that calls for a fair, safe, clean and transparent fashion industry, reflects on this shift: “for European customers, producing in Romania means fast, low-cost, customs-free or import-free transportation. However, over the past year and a half, many manufacturers have had to raise their prices due to the repeated increase in the minimum wage and rising energy, fuel and water prices”.

“This makes us less competitive on the textile market worldwide and the attention of major brands is beginning to move to other Eastern European countries where production costs are lower such as Bulgaria, Moldova, Ukraine, and Georgia,” she adds.

According to the figures of Employers Federation of Textile, Garments and Leather Industry (FEPAIUS), the Romanian textile-clothing industry represented 10.8 % of exports in 2016. There were over 7428 companies working in fashion: 4116 in clothing, 1312 in textiles and about 2,000 in leather. Furthermore, 4.51 % of the total Romanian workforce is linked one way or another to the fashion industry.

For Elena Stoica, president of the Association of Confectioneries of Romania, “80% of the products 'made in Romania' are actually made for export.” Clothes from brands such as Louis Vuitton, Chanel, Dolce & Gabbana, Burberry, Armani, Hugo Boss, as well as Zara, Stradivarius, Bershka, Mango, Next, Dorothy Perkins, M&Co, Wallis, River Island, Massimo Dutti bear the tag “made in Romania” on their products she says.

Working conditions in the fashion industry

In Romania, the minimum wage in the textile industry is 250 euros net per month. Rachieru considers that working conditions could be improved in some factories. According to Fashion Revolution standards, there are some places where employees work more than 8 hours a day without any break for lunch or rest, where the pay is low and delayed sometimes for up to 3 months. Faberrom says they are not one of them: working hours are between 7am and 15.30pm, with regular breaks during the day.

“We work a lot with tartan and this pattern is quite tiring for the eyes. The different stripes need to match so it requires our full attention. We also work with delicate textiles such as silk and you want to be fully alert.” an the production manager describes. Other are less lucky but quietly accept the situation out of fear of losing their job. Indeed, Fashion Revolution hasn’t registered any complaint for abuse yet, but that’s “not because it did not exist” Rachieru says.

The future of “made in Romania”

Stoica considers that a step forward for the industry would be for Romanian companies to manage the production process from A to Z. At the moment, clients provide the raw materials and only a few parts are actually made in Romania. “This would make it possible for us to sell finished products full price without going through auxiliaries” she explains.

“Design is what we currently lack in Romania”, adds Schoppmeyer. She would like to see Romanian factories selling more than “minutes of work” and for brands to acknowledge the human component in the making process of clothes.

She says that, although brands know in which country their clothes are made, they not necessarily know which companies are making them. And while fast fashion brands are currently switching to cheaper countries, she thinks luxury brands are keeping their interest in the label “made in Romania” because it resonates with quality work and has done so for many years.