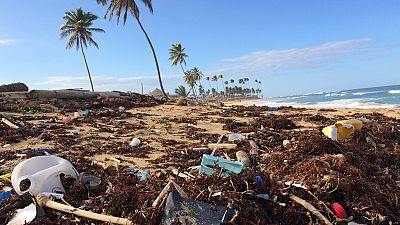 It is no secret that man-made waste is polluting the world at an alarming rate, causing devastating harm to our oceans and ecosystems. As of 2015, approximately 6.3 billion tonnes of plastic waste had been generated, only 9% of which has been recycled and it is predicted that by 2050 there will be more than 12 billion tonnes of plastic in landfill sights. With the catastrophic effects of this production being well documented by the likes of Blue Planet II, people are being urged to find ways to reduce their own plastic waste. In the last few years, artists all over the world have begun to salvage the refuse they have found on beaches and in landfill sights to create art with a powerful message. From giant plastic sharks to dresses made from recycled bottles, these are the best eco art exhibitions to look out for in 2019.

After walking along the beaches in her hometown, Bandon, Oregon and witnessing the staggering amount of plastic waste that was washing up on the shores, artist and educator Angela Haseltine Pozzi decided to set up Washed Ashore. The not-for-profit community art project repurposes all the plastic pollution washing up on the Pacific beaches, turning it into art work that aims to educate communities on how to reduce and tackle ocean pollution. The initiative’s exhibition of giant sea creature sculptures is as educational as it is captivating and can be seen on permanent display at the Washington DC National Museum of Natural History.

The Art From Trash exhibition does exactly what it says on the tin – it celebrates the production of art made from refuse materials. It was originally set up as a community project by Hobart’s Resource Work Cooporative to educated and engage the local community in waste minimisation. Now 15 years old, AFT was one of the pioneering exhibition initiatives of its kind and is still going strong today. Each year artists og all backgrounds – including established and emerging creators, community groups and international contributors – are encouraged to create pieces of work from the rubbish they find around them. Always thought provoking, each piece adds another voice to the increasing protest against waste and helps to educated visitors on ways to reduce their own. The exhibition, which is held at the Salamanca Arts Centre each year, has now welcomed over 5,000 visitors to experience the work of 125 artists.

The Victoria and Albert Museum in London is known for its celebration of fashion, having curated exhibitions such as the 2012 Hollywood Costume and 2015 Shoes: Pleasure and Pain in the past. This year is no exception, with Fashioned From Nature expected to run until the end of January. Exploring the unique relationship between nature and fashion through a carefully curated selection of clothing dating back as far as 1600, the exhibition takes a look at the impact the fashion industry is having on the environment (it was recently unearthed that fashion is the second largest polluter in the world). Garments such as Emma Watson’s 2016 Met Gala dress, which was made entirely from plastic waste, and a dress made from the leather alternative Vegea on display, it aims to inspire visitors to think more carefully about the carbon footprint of their own fashion choices.

As part of the Programmed: Rules, Codes and Choreographies in Art exhibition at the Whitney Museum in New York, artist Tamiko Thiel has recreated the world’s coral reefs – but using plastic bottles. Though, upon first glance, the reefs may appear as they once did in the wild: vibrant and teeming with life, but upon closer inspection, viewers will see that the intricately designed formations are actually made from plastic waste, reiterating in metaphoric beauty the plastic waste crisis besieging our oceans. Overlain with augmented reality, visitors must view the piece through the screens on their phones or the available iPads to see it grow and transform from a natural coral to a plastic one, thus experiencing the alarming growth and impact of plastic waste.