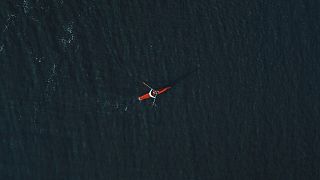 From an early age, we are led to believe the way to the ‘good life’ is via hard work and a steady, well-paid job. Yet this well-worn path doesn’t work for everyone. At the age of 34, Roz Savage was an Oxford graduate and a high-flying management consultant. She had all the established trappings including a nice house in London and a fast car.

It was just on the inside that everything was falling apart.

“Towards the end of my time working in the City my self-esteem was going down the pan,” sighs Savage. “I wasn’t thriving in that environment at all. It felt like my soul was being eroded. I had to get out of there. But I just didn’t have confidence in my abilities. So this really was do-or-die. I needed to find some way to rebuild myself.”

The epiphany came when Savage sat down to write her own obituary. Twice. The first was the version she was heading for: all very comfortable and safe, but dull. Next she wrote a fantasy version, full of adventure. The attraction was such that to the alarm of her family and friends she made the first big independent decision of her life: she quit.

Still Savage had no vision of what to do instead – indeed it took years of casual work and drifting until lightning struck. To earn herself a platform to speak on her passion for the environment, she would row single-handed across the Atlantic Ocean.

Cue a thunderstorm in her emotional mind…

“I can imagine my internal observer saying, ‘What the hell is she thinking? HQ we have a problem, she’s lost it,’” smiles Savage. “But when you behave courageously it thinks, ‘OK, let’s see how this goes…’

“When I began my voyage, people posted nice comments on my blogs, saying they admired my courage and resourcefulness. At first, I definitely didn’t own those words. Courageous? Not me. Then I thought, ‘Why not me?’ I had a whiteboard in front of my rowing seat where I wrote the words, then I’d deliberately embody courage and resourcefulness. I made significant progress with that.”

Savage insists resilience isn’t something we either have or we don’t, it’s a character trait we learn along the way once we’ve made a big decision. To cross the Atlantic she had to row for 12 hours every day for over 100 days. She faced up to 10-metre waves with only herself for company, above all when she lost her only contact with the outside world, her satellite phone.

Having watched the movie Jaws, she admits to terror any time she had to leave her boat to clean barnacles off the hull – not least when she once had to cut away her sea anchor after it got stuck and started dragging her in the wrong direction.

“That might sound trivial but to me it was a big deal,” she recalls. “I took a video in case I didn’t make it back, but by the end I’m beaming. I felt proud of myself that I did something that really scared me. It takes a lot to scare me now – and even when I am scared of something, it’s not a showstopper.”

Savage has gone on to become the only woman to row solo across the world’s three big oceans. Along the way she has taken five million rowing strokes, each a crucial step towards building up enough grit for her to take on the entire world.

The adventures have now given her an inner steel she could never dream of during her quest for conventional success, along with an even deeper understanding of the flaws in the ambitions that are supposed to be vital for happiness. She now travels the planet – on land this time, mercifully – writing, speaking and lecturing on sustainability, courage, resilience and change.

“We are not taught important life skills in school, like finding a purpose and having resilience,” she adds. “In my teaching today I see wonderful undergraduates selling out and going for the money. So we need to change our idea of what success looks like – away from the materialistic model that, to paraphrase Gandhi, serves our greed instead of our need.

“It’s time to craft a new narrative, closer to the values and integrity of Atticus Finch in To Kill A Mockingbird. We need a new definition of success where we admire character, courage and taking action for a cause you believe in…”

Writer: Clyde Brolin - is the author of In The Zone: How Champions Think and Win Big