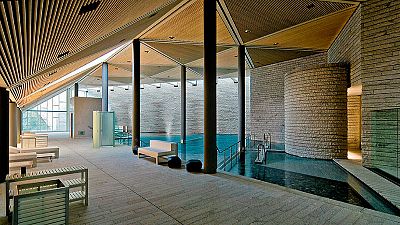 In 2016, the World Health Organisation labelled stress the ‘epidemic of the 21st century’ after finding that around 560 million people worldwide suffer from either depression or some form of anxiety. Whilst the internet and social media has, in many ways, made life markedly easier, it is impossible to deny that, in others, it has also inadvertently made life more difficult – we’re now expected to be contactable at all times and find it more and more challenging to switch off.

As such, spa holidays have become extremely popular with people seeking respite from the demands of their everyday lives, meaning that, as of 2015, the global wellness tourism industry was valued at $563 billion and the spa market at a cool $99 billion – a $5 billion increase from just two years before.

As the demand for wellness focused holidays has increased, so has the calibre of spa and Switzerland has been at the forefront of this shift. With spectacular views, natural mineral springs and some of the cleanest air you’ll find on the planet, it’s little surprise that many are heading there for their wellness fix. It’s the landscape – which is the most mountainous in Europe – and the country’s focus on self-care that sets many of its spas apart from the rest of the world and there are luxury retreats to be found in almost every town in the Alps.

‘Going to a spa is no longer just a fashionable thing to do – it is now part of every day lifestyle habits,’ reiterates Cyrille Paugam, the spa manager at the Royal Savoy Hotel in Lausanne. ‘Parallel to this, luxury Swiss cosmetic brands such as Valmont, La Prairie and La Vellee have international profiles that are associated with excellence, so the Swiss spa industry has exploded over the last twenty years.’

It is perhaps this focus on quality products that has the discerning traveller flocking to Switzerland – patrons visiting its spas know that only the highest quality products will be used and that they’re in for a range of treatments that goes beyond the average massage or facial.

But which one to choose? Whether you’re looking for a physically or spiritually transformative experience, there’s a Swiss spa out there for everyone.

The Romans first discovered Switzerland’s wealth of hot springs over two thousand years ago and Bogn Engiadina showcases some of the best with its six pure mineral water pools and its Roman ritual treatment which incorporates dry and wet heat. Almost a therapy in itself, the rippling, multi-colour lighting leaves you feeling cocooned and calmed.

Le Spa du Royal at the Royal Savoy Hotel is a one-stop-shop for those suffering from physical fatigue. Perched on the shores of Lake Geneva, the industrial design seamlessly integrates with the natural setting. Home to both indoor and outdoor pools and an exclusive range of Swiss Glacier Water skin treatments, its menu is extensive enough for you to enjoy several days there without having the same experience twice. Whether it’s the caviar facial to boost tired skin or the foot acupressure that interests you, each treatment has been carefully designed to alleviate the physical stresses of leading a busy life. Visiting with a group of friends? Book into the private spa, which includes its own steam room, sauna, Jacuzzi and treatment room.

Those seeking the quintessential mountain spa experience should look no further than the Tschuggen Grand Hotel, which is set into the mountains of Graubunden – a popular ski destination that boasts a stunning panoramic landscape. Architect Mario Botta’s prime concern was for the design of the spa to complement the surrounding backdrop which you’ll see in the Alpine-like pillars that jut out of the pool and the sail-esque quality of its iconic windows. The real star of the show, though, is the outdoor bath – a steaming oasis that showcases a God-like view of the towering mountains that surround it.

Corinne Denzler, CEO of the Tschuggen Hotel Group believes that its this life-affirming Swiss scenery that is often the most rejuvenating aspect for clients – even more so than the treatments, explaining that: ‘The total immersion in nature is what allows the mind and body to immediately detach from the stresses of a city life.’

Rather than placing them down in the basement or in perfunctory, functional building, the spas of these hotels are a reflection and celebration of their natural surroundings, fully aware that most of their patrons only get to experience rural beauty when on holiday. Perhaps it is this – and the occasional piece of incredibly local chocolate that entices the world to Switzerland’s spas.