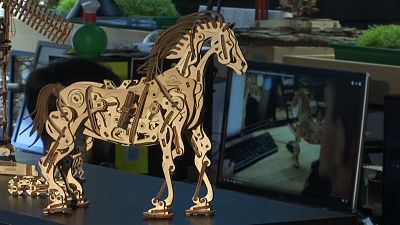 Welcome to Ugears’ workshop, where horses, trains and instruments powered by gears, cranks and rubber bands are crafted.

The self-assembled mechanical models, made from sustainably-sourced wood, are popular all around the world.

In an age where smartphones, iPads, games consoles and Netflix dominate the at-home entertainment world, Ugears’ CEO and co-founder Gennady Shestak says the secret to his success is down to its simplicity.

"People get tired of everything, including gadgets,” says Shestak. “When working on a gadget, a person moves only one finger and it also becomes boring. People have a need to create something by themselves. In this, they want to have a ready-made solution.

“Our puzzles don't need to be cut out, they don't need glue … when buying our product, the client makes the model by himself but without additional work like cutting out, sawing or sharpening. So we provide a ready solution from the beginning."

Kyiv-based Ugears was formed four years ago, but gained global renown in 2015 after they launched a successful crowd-funding campaign to promote their wares, in which they raised $400,000 after asking for just $20,000.

Over 200 employees engineer the innovative models, which range from small colour wooden boards for children, to musical instruments and complex assembly trains and ships.

"Since very ancient times people have worked with wood. It's normal. The second interesting thing is that rubber bands drive the motors here. This type of drive has probably been known since the middle of 20th century or even earlier.

“It just makes people feel nostalgic. Electric motors or simple software could easily be installed here. But it wouldn't be the same if that was done. It wouldn't be that kind of so-called magic that we have in our models."

7 of the best urban wildlife photos