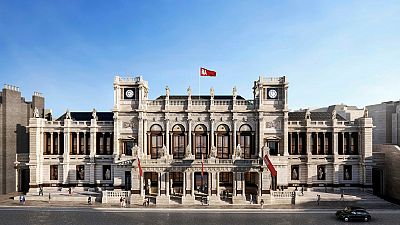 Artist and President of the Royal Academy since 2011, Christopher le Brun, quotes the controversial modernist poet Ezra Pound when contemplating what he hopes the Royal Academy’s new multi-million-pound renovation will achieve.

Pound proclaimed the maxim ‘make it new’ to encourage others to experiment with literary form and take inspiration from untraditional sources. Pound even recycled his own expression, he read it in an anecdote about the first emperor of the Shang Dynasty (founded circa 1766BC), Cheng Tang, who had the words inscribed on his washbasin.

“Make it new. If you’ve had a place for 250 years, like the Royal Academy, that’s quite a good idea. Of course, you’ve got to keep all that’s good about it, but set it up for the next generation.” Says Le Brun.

The grand refurbishment by David Chipperfield Architects, which opened 19 May, was ten years in the making. Burlington Gardens, which was acquired by the Royal Academy in 2001, has been restored to its former glory and includes a 260-seat lecture theatre, echoing the building’s original use as part of the University of London.

There is a dedicated architecture studio that will hold free displays, the Clore Learning Centre beneath the theatre will host schools and communities, and there is a gallery solely for the work of the Royal Academicians.

“The academy is directed and led by artists with no government money,” says Le Brun, “the academicians are our unique factor – and it’s virtually the only place in the world like it.”

A trio of naturally-lit galleries, the Gabrielle Jungels-Winkler Galleries, will house contemporary art and architecture exhibitions. The inaugural show is Tacita Dean: Landscapes; a collaborative spectacle with the National Gallery and the National Portrait Gallery who are also showing Dean’s work.

The Collections Gallery – curated by Le Brun and free to peruse – features masterpieces from the RA Collection, including John Constable, J.M.W. Turner and Michelangelo’s Taddei Tondo, which is the only marble sculpture by the artist in the UK.

“One surprise during the project has been the number of works in the academy collection that have been lent out to other places,” remarks Le Brun. “A huge painting, a copy of The Last Supper, which was done in Leonardo’s lifetime was loaned to the Magdalen chapel in Oxford, so that’s coming back and going into the Collections Gallery. ”

Back in Burlington House, newly-unveiled vaults give visitors an insight into the history of the RA Schools, while a studio displays the work of the students.

“I think of Mayfair as a wonderful survival of craftsmanship – the tailors, the shirtmakers, the shoemakers, the hatters – and downstairs we’ve got students making things, too.” Says Le Brun.

The concrete Weston Bridge connects Burlington Gardens to Burlington House, and provides another thoroughfare between Mayfair and Piccadilly, a load previously borne by the Burlington Arcade. This also means that a new entrance provides access from Mayfair, an addition that Le Brun hopes will entice those who might be intimidated by the courtyard.

“There’s no doubt that our demographic has a certain look about it. But I like to think the academy can look after people when they come to the area. So you can come here to eat, drink, get information about the commercial galleries.”

By increasing facilities, Le Brun hopes to broaden this demographic and shake off any stuffy preconceptions: he wants people to experience art first-hand – “to see and feel it”.

"The academy does exhibitions that have a theatrical, exciting and almost emotional side to them. It was set up to enable the artists to have a bit more freedom in their subject matter and to appeal to a general public.” Says Le Brun. “A work of art shouldn’t be trying to persuade you of something, it should be a value in and for itself, of which one can see the attraction and beauty of it.”

In a 1913 document, A Few Don’ts, that Pound penned about poetry, he says: ‘An “Image” is that which presents an intellectual and emotional complex in an instant of time. It is the presentation of such a “complex” instantaneously which gives that sense of sudden liberation; that sense of freedom from time limits and space limits; that sense of sudden growth, which we experience in the presence of the greatest works of art.’

With this in mind, I think Pound would be quite proud that Le Brun has taken his catchphrase, and made it new once again.