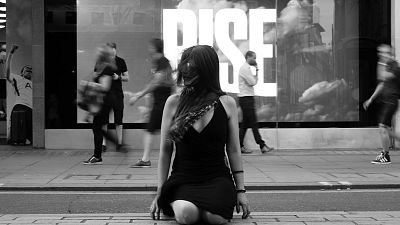 Her music, performed in the streets of London, has inspired tens of thousands around Europe. Now she’s taking her music to all of Europe.

Portuguese singer Susana Silva left her country 10 years ago and found herself living in the streets of London.

"I was a little bit disappointed with Portugal so one day I just picked up my bags and left," she said to Euronews.

Flanked by a two-string guitar, she began performing on the South Bank and soon enough her name became recognised in the music world.

With her debut album “Words of Power” released, she is off to the streets of Europe to "go closer to the people who have been there for me", she says.talent

It is time to watch her modest and yet inspiring appearance next to the headquarters of Euronews in Lyon by clicking on the video above.

Stick with us for more videos about lifestyle, culture and savoir-faire around Europe on Living it.