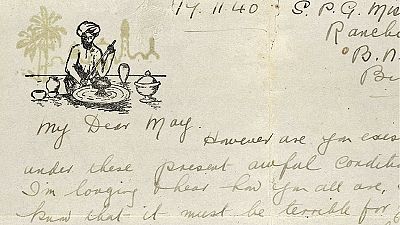 Over 700 personal letters were by chance preserved in an airlock onboard the SS Gairsoppa as it sank to the bottom of the Atlantic in 1941. A selection of those is now going on show in London.

The exhibit in London's Postal Museum tells the story of steam cargo ship, the SS Gairsoppa, which was attacked by German U-boats while travelling from India to Britain in February 1941. Torpedoed around 300 miles off the coast of Ireland, the ship then sank almost 4,700 metres to the bottom of the North Atlantic Ocean. It lay there forgotten for 70 years. Fast forward to 2011, marine archaeologists discovered the long-lost shipwreck.

In its cargo sat millions of ounces of silver, sent from colonial India to the UK to help fund the war effort. But as divers sifted through the wreckage, another surprising discovery appeared.

"And in the conservation lab, slowly and suddenly words and phrases started to appear. And now this turned out to be a collection of some 700 letters, written from British India in November and December 1940. It's the largest collection of letters to survive on any shipwreck, anywhere in the world, since people started to write," said Marine Archaeologist and Guest Curator Dr. Sean Kingsley.

"It shouldn't have been preserved, but because there was no light, there was no oxygen, it was darkness, it was like putting a collection of organics in a tin can, sealing it up and putting it in a fridge freezer," explained Dr. Kingsley.

Written 77 years ago and never delivered, the letters shed light on correspondence during the war. There are examples of soldiers writing to loved ones, businessmen and missionaries.

One joyful letter, written on 1 December 1940 by Private Pete Walker is to his "most precious sweetheart" Phyll.

Walker writes how he'd "wept with joy" after she accepted his marriage proposal, her acceptance was also sent via mail.

"He has received her acceptance of his offer of marriage, all conducted through the post," explains Emma Harper, exhibitions officer at The Postal Museum.

"And it's just so gushing, he says; 'I wept with joy, I couldn't believe it, you don't know how happy you've made me darling.' But then in contrast to that, he spends the first half of the letter just going on about; 'Oh, I've just been waiting for the right letter and the right order. I've had books from you this week, I've had newspapers, but it was this letter that I've been waiting for."

84 crew members and 2 gunners were onboard the SS Gairsoppa when it was torpedoed. Just one man made it back to land alive.