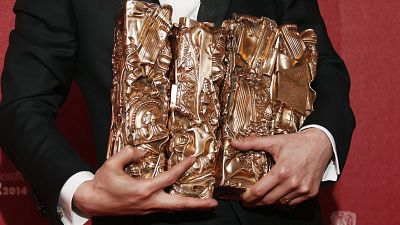 The César awards, always referred in singular and never in plural, are the French version of the Academy Awards.

They are granted annually, at the end of February or at the beginning of March.

Here are five things you might not know about the César ceremony.

It all began with the bronze ‘trophy’

The father of the César ceremony is Georges Cravennes, a French journalist, and well-known event producer. Cravennes was obsessed with the American Oscars since he was 13 years old.

"(...) The idea of creating a French equivalent sprouted in me, until the day when the name of my friend César, a genius sculptor, imposed upon me and his sculpture with him. 'Oscar', 'Cesar', five letters that rhymed so good that the birth of the second had become obvious.”

César is César Baldaccini, a sculptor from the south of France who had nothing to do with the world of cinema. However, the artist embarked on the French Oscars journey with Cravennes.

Baldaccini designed the César award trophy relying on the famous Oscar sculpture. The first design, a man standing ´unwrapping a reel of film´, was highly criticised, so the sculpture had a complete makeover and became the César Award trophy we know today. The trophy has a golden colour but is actually made of bronze.

The first César ceremony was held on April 1976 at the Théâtre de l'Empire, Paris. In the beginning, only 13 awards were given. But over the years, up to 22 trophies were awarded in a single ceremony (1991).

Some of the awards have disappeared, the award for “Best Adaptation”, created in 1983, survived only two years. It remerged in 2006. The César for Best Poster was created in 1986 and then disappeared from the roll in 1990.

Today, only twenty-two trophies are awarded (twenty-one categories, as the animated category, has two statuettes).

The language of the films considered for the César awards was a big controversy in 1993.

The Academy of Cinema, Art and Techniques, led by Roberto Enrico in 1993 decided to reserve nominations for francophone movies only, in order to protect the French cinema from the American competition and preserve cultural identity.

The announcement was made two months before the ceremony meaning that English-speaking but French productions with great success, like L' Amant, Lunes de fiel, Fatale, 1492: Christophe Colomb, were ineligible.

The controversy obliged the academy to take back the prohibition a week later, applying it only to the category of best film.

Later on, the decision was fully removed.

The César Awards replaced the "Etoile de Cristal" ceremony, which existed from 1955 to 1975. The winners were chosen by a jury of critics and artists from different sectors of the French film industry.

From 1934 to 1986, the Grand Prix du cinéma français, established by the pioneer of cinema Louis Lumière, awarded a prize to one exclusive movie every year.

The Salle Pleyel hosted the César awards for the first time in 36 years in 2017. This year's edition will also be hosted in Salle Pleyel.

The Parisian hall is close to a century old, the building was inaugurated in October 1927. A renowned icon of modernity with Art Deco styling, the hall attracted the greatest symphony orchestras and prestigious artists like Stravinski, Debussy or Ravel.

Charlotte Gainsbourg was only 14 years old when she won the César for best female newcomer for her role in Claude Miller's "L'Abrrontée".

Best moments of the 2012 edition