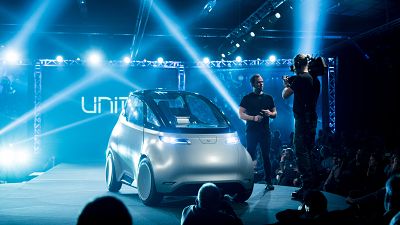 Swedish electric car maker Uniti began as a Lund University innovation project. It has been brought to life through an equity-crowdfunding campaign, which raised over € 1.2 million. 367 investors from 29 countries wanted to take part of funding this project.

This car is made for the urban millennials. It claims to be lightweight; is made from sustainable composite materials and is packed full of new technologies for those city drivers wanting to be constantly connected.

Owners open the car door with a quick scan of a keycard, whilst the vehicle's steering system resembles a Wii controller rather than a traditional steering wheel.

It claims a 300-kilometre range with a 22-kWh battery and it's charged using induction technology, rather than traditional cables. There's also a removable battery pack that owners can take and plug in at home or at their office desk.

The startup says it's already received over 2,000 pre-orders.

The startup is now setting its sights on India. Having teamed up with Bird Group, it's aiming to bring a five-seater version of its city EV to the Indian market by 2020.