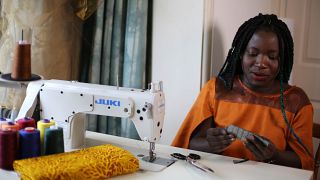 Meet fashion designer Euphemia-Ann Sydney-Davies, who fled Sierra Leone to escape a brutal civil war 20 years ago. Since then she established her label Sydney-Davies in England, and her belief for ethical fashion took her even further — all the way to the Buckingham Palace.

Sydney-Davies has been chosen to represent West Africa as part of the Commonwealth Fashion Exchange, where she’ll present one of her creations alongside other designers at a reception in the presence of the Duchess of Cambridge on 19 February, during London Fashion Week.

The initiative from Liv Firth, founder of Eco-Age and wife of actor Colin Firth, aims to champion sustainable, ethical fashion by pairing designers, such as Stella McCartney and Burberry, with artisan producers from the Commonwealth's 53 countries.

"I never envisioned this when I left Sierra Leone, that I would even be where I am now and working on such a monumental project...it's an incredible opportunity and it shows that what people need is opportunity," said Sydney-Davies.

“The fashion industry does have a responsibility because we are the ones creating these pieces, we are the ones supplying the world with clothing, and our behaviours and attitudes towards clothing and our practices does affect the sustainability and ethical aspect of fashion,” she said.

She added that consumers can also do their part to slow down fast fashion and support producers working with ethical supply chains.