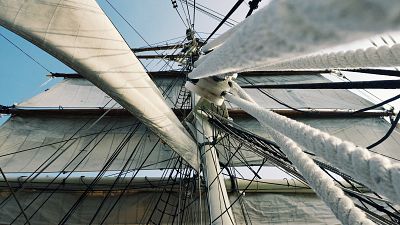 As it has done since 1981, The Voiles de St Tropez has brought the yachting season to a close.

The event brought together some 4.000 boat lovers and 300 vessels, both classic and modern, for ten days of exciting races on the beautiful and challenging Mediterranean waters.

Among the special guests this year was the legendary Manitou, nicknamed the floating White House, which used to belong to president Kennedy.

“He would sleep here when he was on the boat,” he says, showing us the luxury bedroom. “Buying it was probably one of the first things he did when he became president. He loved sailing, he was a naval officer and he really enjoyed the sea. Legend has it that Marilyn Monroe spent time here too, but I don’t know any more than that…”

The yacht is equipped with the usual portholes, and even a small fireplace – which came in handy during races on the Great Lakes. But the highlight is in the bedroom, says Guy Robinson.

“This is the most famous part of the yacht: the bathtub, which Marylin Monroe might have famously used. Here it is, it’s the only shower room on board. It may not be very convenient on a vessel, but you can use it.” Robinson picks an elegant flare gun out of its holder on the wall. “And here is the flare gun, I think it also belonged to the President. In case of an emergency, you shoot, and it lights up the sky… it’s a pretty object.”

At the grand old age of 80, the elegant, legendary vessel will continue harbouring its secrets and fueling admirers’ dreams for years to come.