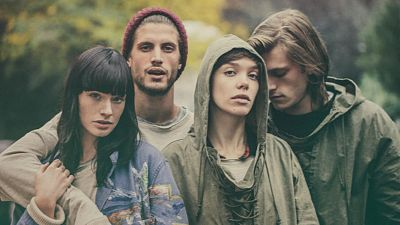 News of the Rana Plaza factory disaster which killed over 1,000 garment workers in April 2013 had a huge effect on the fashion industry, not least because of the many individuals who vowed to turn the atrocity into a positive fashion movement.

Matteo Ward was one of them. Giving up a job as a Senior Manager in Germany for Abercrombie & Fitch, he launched WRÅD, a company which helps to educate young people about the negative impact mainstream fashion practices are having and runs its own sustainable clothing line.

“I gradually started to uncover more and more disturbing facts about the industry – both from a social and environmental standpoint,” Ward told Living it on his decision to educate himself about his own line of work after hearing about Rana Plaza. “Who I wanted to be in life did not match with what we, as a whole, were doing in this industry.”

So, in 2015 he launched his company with business partners Silvia Giovanardi, a former senior menswear designer at ETRO, and Victor Santiago, a photographer and previously a manager with Abercrombie & Fitch. Today WRÅD educates around 5,000 students a year, sharing their message of social consciousness through fashion, and their unisex clothing brand is sold on Yoox.

Ward wants it to be much more than just another fashion company though, “Our mission is to inspire people to manifest intangible social and environmental values through tangible things; products capable of pushing people to fight with us for the setting of a new order of sustainable action.”

The collection designs themselves are inspired by this philosophy. Slouchy, sportswear styles are embellished with the WRÅD logo and inspirational slogans and artworks. They act as a way for anyone, regardless of age, gender, sexual orientation, race, or religion, to express their beliefs through their clothing, a sort of military uniform for ethical revolutionaries. They work with natural, organic materials, and openly share details about the people who make their clothes, ensuring transparency in their whole supply chain.

They also incorporate a number of cutting-edge technologies into the brand, working in partnership with those who are developing sustainable alternatives in manufacturing. Their GRAPHI-TEE® won Best of the Best 2017 at the RedDot Design Awards for the development and use of a technology they named G_PWDR which up-cycles otherwise wasted graphite powder and uses it as a substitute for toxic chemical fabric dyes.

“I obviously had a lot of reservations back in 2015 about setting up WRÅD, and spent many sleepless nights before taking the final decision to leave my comfort zone at work,” admits Ward.

“But the aspiration to give it my all, in collaboration with other people like me, to establish a brand through which we could eventually have a strong social and environmental impact in society was stronger. Gradually seeing it happening more and more everyday today at various levels truly pays off for all of the past, current and future challenges we will face.”