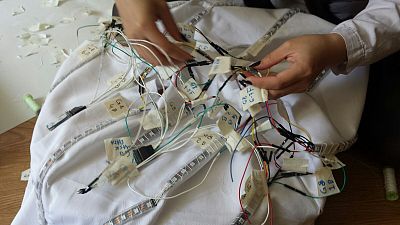 Like flashing origami clouds flying from one crossroad to the other, this troop of walkers, wearing the strangest accoutrement, progresses in the midst of the congested traffic of Manchester, indifferent to the intrigued gaze of passers-by.

It’s Friday night, in the middle of July, and the air is warm and thick. The artist and activist Kasia Molga is showcasing for the first time her creation, Human Sensor: a technological garment resembling the shape of lungs.

“Art and design are perfect platforms to test very futuristic scenarios. Human Sensor is not just an educational tool or an informative one. It is a platform to tell a story.”

The tragic story of air pollution and its harmful effects on our health and our environment. According to the latest figures*, it kills more than 5 million people every year.

Human Sensor gathers, evaluates and projects air quality data on its surface. Micro-sensors in the mask collect variations of temperature in the wearer’s breath. These data are then analysed by a tiny computer called Raspberry Pi hidden under the cape. Coloured light-emitting diodes lined in the lining light up according to changes in pollution levels.

When the air is – relatively – pure, the alveoli mimic breathing movements and alternate between white and blue. If pollution is felt, the garment turns red to inform its wearer and the rest of the world, both on the street and on the Internet, as this data is also broadcasted live on the web.

“The concept behind Human Sensor came to me a few years ago when I was seating in my London flat during one of the hottest days of the year. For the first time in ten years I got an episode of asthma and I had to go to the hospital”, Kasia Molga explains.

“I suffered from asthma as a child and I was actually quite ill. I was always a bit weaker than the other kids. When I grew up, I realised that my body reacts much faster than a proper healthy human body to changes in the environment. In a way, people who suffer from asthma like me could be considered as superheroes”.

This may explain the aesthetics of Human Sensor. A piece of clothing, which, truth be told, is more costume party than every day outfit material. A comment that makes the artist smile.

“This is a first edition and it is mainly a performance piece. But I want to look at it as something very futuristic and something, which possibly might get smaller and embedded it our regular clothes. There are so many gadgets out there, which inform us about environmental changes. However, I think we treat them as disposable.”

On the contrary, clothes possess an aura being both intimate and social. “Clothing is something we all have. It is something that, at the same time, connects and disconnects us from the environment” she sums up.

‘Human Sensor’ is commissioned and produced by Invisible Dust in partnership with Manchester, European City of Science. It is supported by The Wellcome Trust’s Sustaining Excellence Award and Arts Council England.