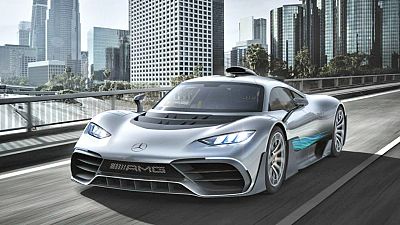 The high performance two-seater hybrid produces over 1,000 horsepower and reaches top speeds of beyond 350 kilometres an hour.

“The AMG Project One is not just a homage to the motorsport traditions of Mercedes. Quite the opposite, it is a look at the future of Mercedes AMG. The goal was always the best possible performance, and that it is not reliant on petrol. That is why the future of our performance market is in hybridization and electrification. This show car is showing the way”, says Daimler’s Dieter Zetsche.

“It doesn’t have a much horse power and probably don’t have the same top speed as the Bugatti Chiron, but around a race track Mercedes AMG is saying this could be as fast as a Formula One car, which would make it mind blowing compared to anything else on the road.

“It’s unclear whether or not this will be road legal, I think it might actually be, but Mercedes isn’t saying just yet whether it will be, but top speed of about 250 miles an hour, accelerate to about 125 miles an hour in less than six seconds so it will be outrageous performance on the road, but it’s rolling on street tyres so you never know.”

Mercedes AMG is expected to produce around 275 Project Ones, marking AMG’s 50th anniversary.

It’s believed to be priced over two million euros.

But don’t rush to the phone, most of them have already been pre-ordered.