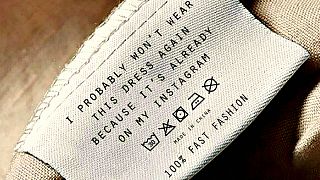 “I probably won’t wear this dress again, because it’s already on my Instagram,” reads the label on a piece of clothing, next to “Made in China”. It is part of a visual campaign drawing attention to the negative impact of fast fashion consumption.

Elizabeth Illing, a Fashion Promotion graduate created the “Stopshop” campaign as the final project for her degree at the University for the Creative Arts in London. The project became successful on Instagram when she posted some quotes from consumers reflecting the different levels of value placed on fast fashion purchases. The messages were printed on clothing labels, as she believes people relate to them.

The inspiration for this project came from Elizabeth’s perception that more and more of us are making ethical lifestyle choices when it comes to food, travel, and work, yet sustainable fashion is not at the forefront of consumers’ minds. Fast-fashion stores create dozens of relatively-cheap micro trends every year, producing affordable versions of exclusive brands’ products.

You might buy a dress that costs €15 even if you aren’t crazy about it; an attitude that leads to cheap and disposable items of clothing filling our wardrobes, which eventually end up in the bin. This phenomenon is not only a disaster for your wallet but for the planet as well. The negative social and environmental effects caused by the fashion industry are numerous. For example, it can take 2,700 litres of water to produce the cotton needed to make a single t-shirt.

Elizabeth found herself consuming fast fashion, so she decided to start her project by studying her own wardrobe. She checked where her clothes were made, the majority, maybe unsurprisingly, came from China, Turkey, and Bangladesh.

She created “wardrobe waste” tags to show how much individuals spent on garments they hardly wore. She also carried out a survey focusing on how many times, on average, garments were worn. To visually represent her findings, she made an installation using oversized receipts that she folded into the form of t-shirts, each of them constituting an individual’s wardrobe.

The overall message from those supporting ethical fashion is that it is probably time to consider a “timeless wardrobe” and only buy clothes that you really needed. Clothes can say a lot about a person and sustainable fashion should be an eternal trend.

If you want to read more about ethical fashion, click here.