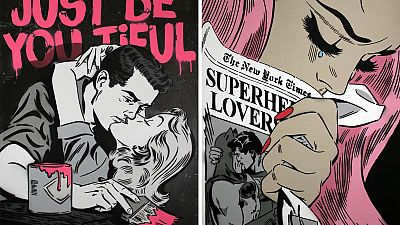 Rich Simmons is a British self-taught contemporary urban pop artist who rose to fame in 2011 with a piece of street art showing William and Kate before their royal wedding. The piece entitled ‘Future ***King’ depicted the royal couple as Sid & Nancy of the Sex Pistols and became famous around the world in less than a day. Since then, the artist’s popularity hasn’t faded. His noticeable colourful and humorous style, merging and deconstructing comic books imagery and reclaimed billboards, opened him the door to prestigious galleries worldwide. In 2008, Rich also formed ‘Art is the Cure’ to spread the message of creativity as a mean to battle against depression, autism and social anxiety issues. Living it caught up with the artist whose work is exposed at Box Galleries on London’s Kings Road this summer.

Which contemporary artists inspire you the most?

“I’m definitely inspired by artists like Banksy and Shepard Fairey who really changed the way people view street art, and opened up the public and media to allow artists like myself to get a foot in the door. I’m a big Ron English fan and admire artists who paved the way for pop art to become a movement like Andy Warhol and Keith Haring.”

Where can we spot the best urban/contemporary art around the world according to you?

“I really believe London is at the forefront of the global art scene. We have some of the most exciting galleries putting on bold shows and giving a platform for some exciting talent to showcase their work. London is also iconic for street art and you can see some of the best graffiti and street art in the world here. I love New York and you can feel the impact of that city on the graffiti and pop art culture but I think London is the hottest spot for art right now.” 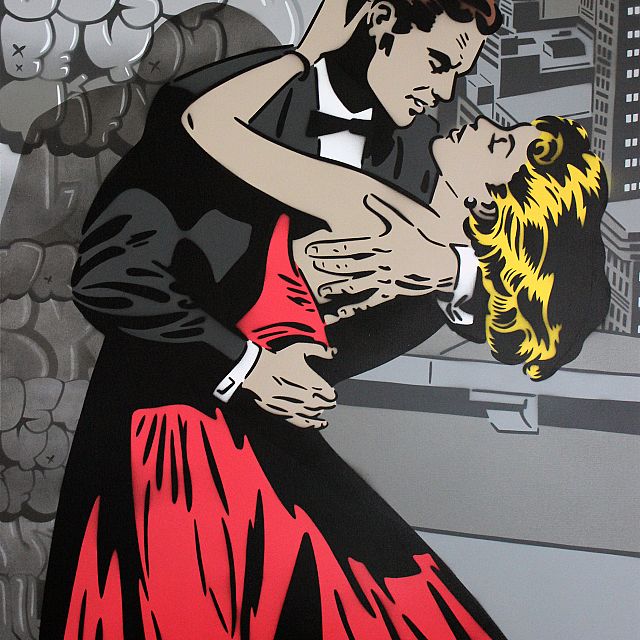 What is the creative process behind each of your piece?

“It is always important to have an open mind and be willing to get inspired by anything at any time. I am always coming up with ideas and once I have a sketch and a design done on Photoshop, it is onto the Lightbox to draw it out, and then I cut the stencils out with a scalpel”. 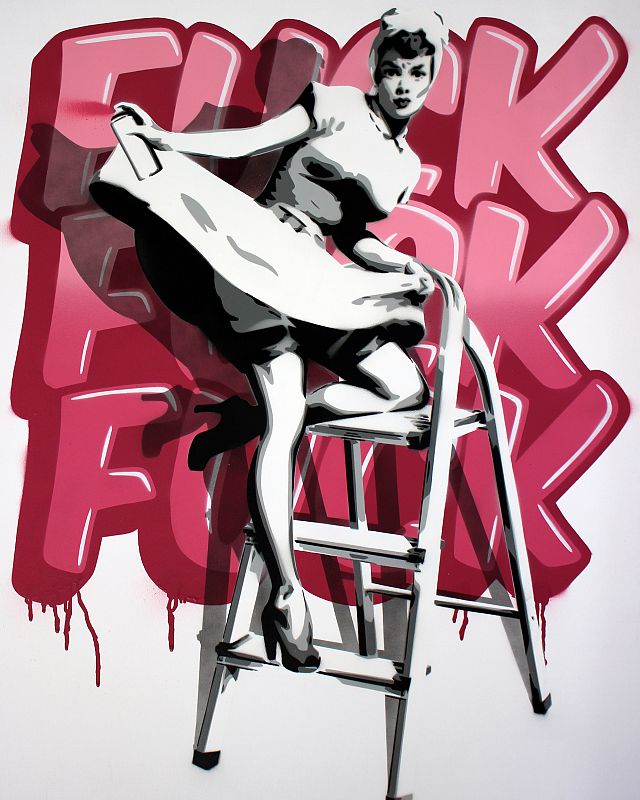 “Once I have the stencil layers all cut, it is onto spray painting them in order. I am always trying to create work that is different and exciting for me as I’m easily bored, and need to mix things up to keep it fresh and fun in the studio. Once the final stencil goes on and everything comes together, I’m always happy and relieved that the layers all matched up and the piece looks the way I imagined it from the start.”

Which artists living or dead would you invite to your ideal dinner party?

“Leonardo da Vinci is my hero. I love his work, his understanding of science and maths, his ingenuity and his inventive nature. He is the archetypal Renaissance man and I take a lot of inspiration from that so I’d love to pick his brain and see how he thinks and sees the world. I would invite Banksy so I could meet the man behind the mystery and Salvador Dali to spice things up a bit.”

“I’m inspired by artists like Banksy and Shepard Fairey who really changed the way people view street art and allowed artists like myself to get a foot in the door”.

Where do you dream to expose your work?

“A lot of my dreams have come true already. I never expected to be in a position to have solo exhibitions but I’ve had multiple London shows and exhibited in New York alongside Warhol and Haring, Los Angeles, Miami and even Azerbaijan. I’m always trying to raise the bar and would love to do something in Japan in the future but I am already living the dream by just having the chance to exhibit my work in places like Box Galleries in London.”