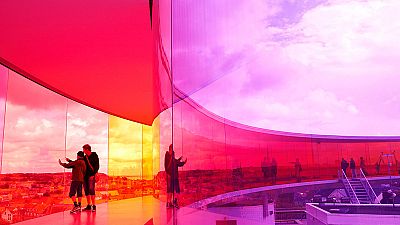 <p>Aarhus, located on the East coast of the Jutland peninsula in Denmark, is 2017’s European capital of culture. The second largest city in the country is about to gain momentum and clearly outshine Copenhagen, by hosting its first ever Triennial titled ‘The Garden – End of Times, Beginning of Times’, starting this spring. The perfect occasion to discover the seaside town exciting art scene and Michelin-starred tables. Living it gets a private tour with the Triennial and <a href="http://en.aros.dk/">ARoS</a> museum curator Lise Pennington.</p> <p>“This triennial is part of the journey into our future and is quite a huge team effort because it will occupy two galleries in the ARoS museum, spread into urban spaces in the city of Aarhus, and continue along the coastal stretch south of the city. The narrative of man’s coexistence with and view on nature will span a period of 400 years and address the past, the present, and the future! So we are mixing two ways of exhibiting art that are usually separated,” explains Lise Pennington.</p> <p>Being audacious and innovative is part of Aarhus’ identity and this is something one can see instantly across the urban architectural landscape. In 2011, the artist Olafur Eliasson installed at the top of the ARoS museum a circular skywalk titled <em>Your rainbow panorama</em> offering to visitors a view in Technicolor over the city.</p> <iframe width="100%" height="360" src="https://www.youtube.com/embed/-ODBMi_PEBo" frameborder="0" allowfullscreen></iframe> <p>Any exhibition at ARoS Museum is an immediate experience. “We try to engage everyone in an instant fascination” Pennington explains. The visitor is invited to penetrate the artwork and live it from the inside like in <a href="http://olafureliasson.net/archive/artwork/WEK100285/your-atmospheric-colour-atlas">Your atmospheric colour atlas</a>, another piece by Olafur Eliasson displayed in 2014. A room filled with a heavy fog infused with the colours red, green and blue, emitted from hundreds of fluorescent lights destabilising the senses. “I think many museums try to work this way but we do it more boldly than anyone else I know,” Pennington says.</p> <iframe width="100%" height="360" src="https://www.youtube.com/embed/DsYdLee2ips" frameborder="0" allowfullscreen></iframe> <p>ARoS Museum is the epicentre of the city, strongly linked to the local community, and responsible for placing Aarhus in the forefront of European touristic destinations. “Twelve years ago, we moved into this enormous building with a rainbow on top and I think that we changed the city’s appeal. Industries used to move away from Aarhus but now their number is growing. Some really good Michelin-starred chefs are even moving out of Copenhagen into Aarhus. We have 4 of them now” she adds. Aarhus Michelin starred tables are <a href="http://frederikshoj.com/">Frederikshøj</a>, <a href="http://gastrome.dk/">Gastromé</a>, <a href="https://www.restaurantsubstans.dk/">Substans</a> and <a href="http://www.restaurantdomestic.dk/en/welcome-english-homepage/">Domestic</a>.</p> <p>For Pennington, this triennial is a pilot that aims to evolve into a new <em>rendezvous</em> of the art world scene. As she mentions some of the highlights, it is obvious the goal of creating “instant fascination” will be completely fulfilled. For example, the artist Cyprien Gaillard will re-lay the floor of a bar using traditional terrazzo with mother-of-pearl from locally caught oysters, linking the space to natural life existing in Danish waters. Along the coastline, Katharina Grosse is spraying 4000 square metres of natural landscape with acrylic paint, thus reversing the theme and the canvas.</p> <i><a href="http://en.aros.dk/">ARoS</a> Triennial Opening – ‘The Garden – End of Times, Beginning of Times’, Aarhus from 8 April to 10 September 2017.</i>