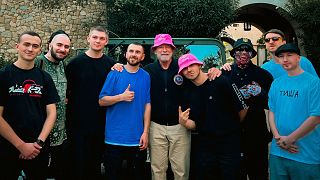 The Terminator is back!

Kalush Orchestra, the Ukrainian folk-rap group who won the 2022 Eurovision Song Contest recently released the music video for their track “Shchedryi vechir” ("Generous Evening"), which features a rather unexpected cameo from an incredibly muscly Austrian-American A-lister.

Yes, we're talking about none other than the legendary Arnold Schwarzenegger.

"That is a great message for all Ukrainian people, especially now in these very, very difficult times, that everyone can have a dream and you can make this dream become a reality," says the former Governor of California in a recorded voice snippet which plays at the start of the music video.

The video sees the Ukrainian band driving through the street of Los Angeles, in a clear pastiche of the hugely popular 2004 video game Grand Theft Auto: San Andreas.

Just as you think the video is over, it then cuts to a shot of Arnold Schwarzenegger alongside the members of the Kalush Orchestra, as he smiles and says the name of the song to the camera.

It was during Kalush Orchestra's tour of North America when they received a special invitation from the iconic actor, bodybuilder and politician, to visit his home in Los Angeles.

"He invited us over to his house and came out to greet us with a pet donkey. We talked about the situation in Ukraine and thanked him for his support and shared how important it was to us. It was a pleasure to meet such a legend; I grew up on his movies," the band's frontman Oleh Psiuk told the Guardian.

The cameo acts as another token of support from Schwarzenegger, who has actively expressed his solidarity for the people of Ukraine and has denounced the actions of Vladimir Putin since the start of the war.

In a viral video posted online, the film icon told Russians that they're being lied to about the war in Ukraine and accused President Vladimir Putin of sacrificing Russian soldiers' lives for his own ambitions.

“This is an illegal war,” Schwarzenegger said, looking straight into the camera while seated at a desk in a study. “Your lives, your limbs, your futures are being sacrificed for a senseless war condemned by the entire world."