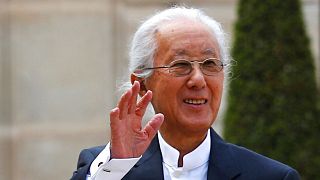 Arata Isozaki a Pritzker-winning Japanese architect known as a post-modern giant who blended culture and history of the East and the West in his designs, has died of old age.   -   Copyright  AP Photo
By Katy Dartford  with AP  •  Updated: 30/12/2022

Renowned Japanese architect, Arata Isozaki, has died of old age at his home on Japan's southern island Okinawa. He was 91.

Isozaki won the Pritzker Architecture Prize, internationally the highest honour in the field, in 2019. He was known as a post-modern giant who blended the culture and history of the East and the West in his designs.

One of the first Japanese architects who designed buildings overseas, he was also a critic of urban development and city designs.

Among Isozaki’s best-known works is the Museum of Contemporary Art in Los Angeles (MOCA), built in 1986, with LA's popular culture and classical architecture in mind.

He also designed the Palau Sant Jordi stadium in Barcelona, built for the 1992 Summer Games.

Iconic buildings such as the Team Disney Building and the headquarters of the Walt Disney Company in Florida were also designed by Isozaki.

Isozaki was also a social and cultural critic. He ran offices in Tokyo, China, Italy and Spain, but moved to Japan’s southwestern region of Okinawa about five years ago.

He has taught at Columbia University, Harvard and Yale. His works also include philosophy, visual art, film and theatre.