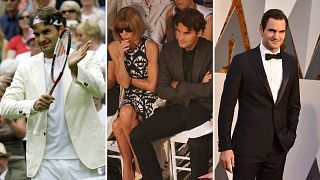 In September 2022, Swiss tennis champion Roger Federer retired from professional tennis after a career that brought him 20 Grand Slam titles.

But Federer won't just be remembered as one of the best to ever wield a racket - but also as one of the most stylish and fashionable players to ever grace the sport.

Over the years, Federer has appeared on several "Best Dressed" lists due to his classic and seemingly effortless way of combining both casual and traditional clothing.

He also earned major points in the fashion world at the end of 2019 after winning GQ'S Most Stylish Man of the Decade award.

So we've decided to curate a list of eight of Federer's most iconic looks throughout his incredible career.

On his way to winning his fourth consecutive Wimbledon, the Swiss sports star made a bold fashion statement with this cream jacket, that some would argue would be more appropriate for a royal garden party than a tennis court.

But Federer some how managed to make it work...

The unlikely pair met at the U.S. Open in 2005, according to Wintour, after a friend of hers arranged the meeting.

“I grew up enjoying Prada and Dolce & Gabbana. I love Dior and Louis Vuitton. I also have a lot of Tom Ford's suits, so that's kind of how I got into [fashion],” Federer has told Esquire.

“And I was lucky enough to meet a lot of those designers as well through Anna Wintour, who is a really close friend of mine," he added.

While Wimbledon had a strictly all white clothing policy, Federer wasn’t afraid to go the complete opposite direction with his fashion elsewhere.

In the 2007 US Open in New York, Federer put together this head to toe all-black outfit, including black shoes, black socks and black wristbands.

His custom designed Nike Vapors featured three circular Swiss flags on each shoe (representing three consecutive US Open titles) and also his initials on the heal and tongue.

As a result of his all-black attire, the American press nicknamed him Darth Federer and "The Imperial March" from Star Wars was played out at the tournament before he entered the court for each match.

The Swiss athlete said that the look was inspired by tennis champions René Lacoste and Fred Perry (who founded their brands in 1933 and 1952 respectively).

The following year, Federer arrived at Wimbledon with yet another statement-making look - this time an all-white military-style suit jacket with gold details. Even his trainers had a gold swoosh.

Federer described the multi-pocket jacket as "a little bit more of a modern look with the military, but staying true to Wimbledon with the white."

“I did feel a bit funny in the locker room with other players looking at me and going, ‘What's he thinking?’” Federer admitted to Esquire.

“But it brought some glam to tennis and some style and something to talk about other than just forehands and backhands. I'm really happy that I did it and that I took chances like that throughout my career.”

Federer stepped out onto the red carpet at the 88th Academy Awards wearing a classic black tuxedo and shoes made by Louis Vuitton.

Could he be in line to play the next James Bond?

At the 2017 Met Gala in 2017, Federer wore this black Gucci tuxedo with a crystal embroidered king cobra on the back.

The tennis legend attended the evening with his wife, Mirka, and admitted he had 'never worn anything close' to the Alessandro Michele-designed tuxedo.

In 2018, the Swiss maestro left his partnership with Nike and instead signed a reportedly $300 million 10-year deal with the Japanese casual wear manufacturer, Uniqlo.

Federer showed off his new black-tie inspired Uniqlo clothing at the US Open in 2019 - which included a black top with a smart short-stand collar.

'A perfect journey': Roger Federer bows out of tennis with final match