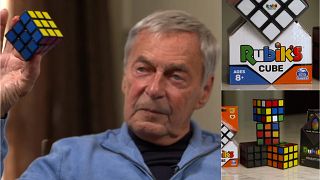 The Rubik's Cube is fast approaching its 50th anniversary but the toy is showing no signs of ageing.

If you've ever had trouble solving a Rubik's Cube, a good piece of advice is to break it down into steps. It's worth a shot: That advice is from the man who made it.

"Problem solving is a very basic activity of the human mind and if a problem is complex you need to divide the problem into smaller elements," says Ernő Rubik, who invented the cube in 1974.

Rubik has seen his color-matching puzzle go from a classroom teaching tool in Cold War-era Hungary to a worldwide phenomenon with over 450 million cubes sold and a mini-empire of related toys.

"For me, the cube represents what freedom means. Freedom is never endless," he says during a recent visit to New York. "It lets you do what is necessary to achieve your goal."

It even made the transition to electronic media with Rubik's Revolution and Rubik's Touch. Spin Master acquired the brand in 2021.

"And so, for me, that cube represented what freedom means. Freedom is never endless. So that does not exist, endless freedom -- all the time there are limitations of freedom. But the important thing is to find what the real potential is of the freedom, and which lets you do what is necessary to achieve your goals so that and everything is there, so it depends only you." says Rubik.

Their latest brainteaser is called the Phantom, which takes the 3x3 original cube and adds a memory test: Using thermochromic technology, the multi-color tiles revert to black unless the heat of the user's hand keeps them visible.

"The principle of the cube is not limited," says Rubik. "The complexity of the task is to stimulate our mind and it makes it a much more enjoyable activity."

The goal of all Rubik puzzles is to start with some randomized and shuffled messy configuration and, by rotating faces or parts, get each side being a single color or a pattern of colors.

Practiced cube-solvers can complete the Rubik's Cube in a matter of seconds, with the current world-record holder solving a cube in 3.47 seconds. There are also records at the World Cube Association for fastest solving while wearing a blindfold or one-handed.

It took 36 years after the invention of the toy for anyone to come up with an answer for the minimum number of moves to solve it. In 2010, a group of mathematicians and computer programmers proved that any Rubik's Cube can be solved in 20 moves.

"One of the main keys of the cube is the contradiction between complexity and simplicity," he says. "On one hand, the cube is a very simple form. And on the other hand, the potential of the variation of movement is so complicated."

Rubik's cube is in National Toy Hall of Fame

The brain-bending elegance of the Rubik's Cube is part of the reason it has endured, while other faddish toys and games — Tamagotchi or Shopkins, anyone? — have not.

In 2014, it landed in the National Toy Hall of Fame, joining such childhood classics as Barbie, Hit Wheels, G.I. Joe and the hula hoop.

The hall noted that the cube has caused its own medical condition, known as "cube's thumb" or "Rubik's wrist." The cube has also show up in TV shows and movies from "The Simpsons" to "The Pursuit of Happyness."