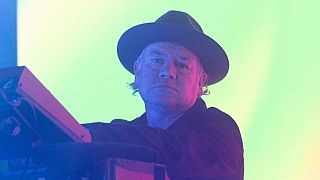 The keyboardist died on Sunday (18 December) from a brain injury following a fall at his home in Brighton, according to bandmate Bobby Gillespie, describing his friend and bandmate as "a beautiful soul".

In an emotional tribute shared on Primal Scream's Instagram account, Gillespie wrote: "We in Primal Scream are all so sad. I've known Martin since he was a teenager in Felt. He played keyboards on every album of ours from the first to the last. Finally joining the band in 1991.”

"Martin was a very special character. He had a love and understanding of music on a deep spiritual level. Music meant everything to him. He loved literature and was well read and erudite. An autodidact. A deep thinker, curious about the world and other cultures. Always visiting museums in every city we played or looking for Neolithic stones in remote places. Opinionated and stubborn in his views."

He continued: "Martin was also in possession of a unique wit. He had a swift eye for the absurd, the surreal and the ridiculous. He lived to laugh and play music. He was loved by all of us in the Scream. A beautiful soul. We will miss him."

Duffy, who was born in Birmingham on 18 May 1967, joined indie band Felt at 16 years old, and was then a part of Primal Scream for three decades, going from part-time to full-time member. Duffy also played with The Charlatans when they supported Oasis at Knebworth, stepping in following the death of their own keyboard player Rob Collins in a car crash just a few weeks earlier.

“Martin Duffy stepped in to save The Charlatans when we lost Rob – he played with us at Knebworth and was a true friend,” Charlatans frontman Tim Burgess wrote in tribute.

“Another tragic loss of a beautiful soul He toured with me in my solo band too – he was a pleasure to spend time with. Safe travels Duffy.”

Other musicians have paid tribute to Duffy.

Duffy was also a member of the rock supergroup The Chavs, formed in 2004 by former Libertines guitarist Carl Barat and Burgess alongside drummer Andy Burrows from Razorlight.

In 2012 he performed as part of another supergroup at a fundraising concert at Manchester Cathedral, this time featuring Burgess and Mark Collins of The Charlatans with Peter Hook of New Order.