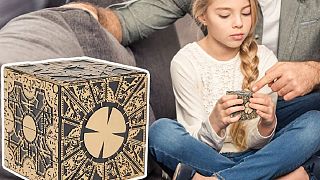 Christmas is just a week away and it’s during this silly season that everyone desperately scrambles to find the perfect presents for their loved ones.

But will your desperation lead you to buying an inappropriate toy for the munchkins in your life?

In an either unbelievably brilliant or deeply sinister move, the folks at Boing Boing have released toy replicas of the Lament Configuration from the Hellraiser films.

For those who aren't au fait with this terror-inducing element or the horror franchise from Clive Barker, the Lament Configuration is a cubic puzzle box that unleashes the extradimensional Cenobites.

Hardly ambassadors for Christmas cheer, are they?

Haven’t we suffered enough this year without tempting fate? Do we need a cherubic child reaching a schism in time and space, thereby summoning Pinhead and his mutilated crew from the depths of fetishistic hell??

That said, the impressively detailed and distressingly faithful replica of the puzzle box is a wonderful way to introduce young’uns to feats of engineering… and the importance of sacrifice, as the only way to get rid of the Cenobites is by sacrificing five human lives.

As potentially hazardous as the Lament Configuration is, it’s not much worse than some other inappropriate – read: seriously messed up – toys out there.

For the future firestarter in your life….

Contains 8 oz. fuel can… Yes, this will end well.

E.T.’s finger can heal wounds in the beloved cinematic classic… However, some of our eagle-eyed readers probably saw the resemblance between this battery-included E.T. Finger Light and a… perfectly innocent and not at all sexual toy.

As if Balenciaga didn’t get into enough **trouble this year**…

There’s plenty to be said about problematic pregnancy themed toys, but this is a baby who is actually having a baby, with “real pregnancy action” and a foetus attached. What were they thinking?

What Barbie gets up to in her own time is none of our business.

To infinity… AND BEYOND

Who thought that straw placement was a good idea?

This last one could actually be quite tempting…

Happy shopping all and buy responsibly.

Hundreds of dolls displayed in Colombia to denounce sexual abuse