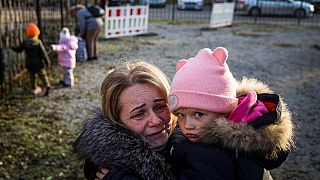 Some readers may find the following details in this story shocking and disturbing. That is partly the reason why Ukraine's Museum of Civilian Voices exists; to safely bring people closer to a conflict that is affecting millions of lives, with the hope of preventing further atrocities.

Serhiy Perebyinis from Irpin learned about the death of his wife, 9-year-old daughter, and 18-year-old son from social media. He saw a grim photo of their dead bodies following a mortar attack, recognising his daughter's dress.

Olexander Zakurdai was ordered onto his knees and subjected to a mock execution, with Russian soldiers throwing a training grenade at his feet.

Oleksiy Pshemyskyi, living in Bucha, had only 20 minutes to piece together the body of his friend and bury him.

These are just some of the nearly 44,000 stories from Ukrainian civilians documented in the Museum of Civilian Voices.

Since 2014 -- the year Russia invaded Crimea -- the Museum has been collecting and preserving the personal testimonies of those caught up in Ukraine's devastating war, which it has presented in an online archive.

It claims to be the "world's largest" collection of stories of civilians who have become victims or witnesses of war.

Why is the Museum collecting testimonies from victims of the Ukraine war?

On its website, the Museum says its "primary goal" is to be a reliable source of information about how civilians have been affected by the war, "so that not a single story, not a single voice, not a single crime of Russia in Ukraine is forgotten."

"It is important to preserve the memory of the past and the present for a peaceful, better future for Ukraine," the Museum adds.

More than 15,000 civilian casualties were recorded by the OHCHR between February and October 2022, though the true figure is likely to be much higher due to the difficulties of gathering information in a war.

"I would like all these stories not to be erased from memory so that our memories remain forever. So that every human story from the Museum of Civilian Voices' archive becomes a call to end this terrible war and prevent similar tragedies in the future," said Rinat Akhmetov, whose foundation funds the project.

The Museum says it has another "meaningful" role. It describes itself as a "unique psychotherapeutic project", which promotes the "psychological well-being and mental health" of Ukrainian people who went through the war.

"Telling stories has a certain healing effect," the Museum wrote in a statement. "In the process of a frank conversation, a person can share their own pain, and also learn through the website of the Museum about those who have similar feelings and experiences."

This "is a part of psychotherapeutic work with trauma, which really gives a result," it added.

43,819 people have contributed their stories to the archive so far, through videos, audio recordings and written statements.

Who is behind the Museum of Civilian voices?

The Museum of Civilian Voices is funded by the Rinat Akhmetov Foundation, Ukraine's biggest private charity.

It is named after Rinat Akhmetov, a Ukrainian billionaire and the country's richest man.

Over 17 years, the organisation claims to have reached almost 25 million people with assistance and informational support. This number equates to half of Ukraine's population.

Since 2014, when Russian troops invaded the Crimean peninsula, the Foundation has provided humanitarian aid to millions of people in southeastern Ukraine.

With the war continuing to rage, the number of testimonies held by the archive is still growing.

Workers and volunteers at the Museum and Rinat Akhmetov Foundation continue to communicate with people and record their stories.

Kremlin: Up to Zelenskyy to end Ukraine war and other key developments