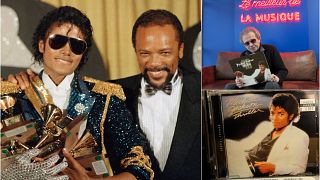 Today marks the 40th anniversary of Michael Jackson's sixth studio album 'Thriller', which was released on 30 November 1982 and remains unchallenged as the best-selling record of all time.

French rock journalist Philippe Manoeuvre looks back at the iconic album, which features songs like 'Wanna Be Startin' Somethin', 'Billie Jean', 'Beat it' and 'Thriller'.

"It is one of the best-selling records in human history," says Manoeuvre. "The last time the people at Sony looked, we were at 66 million physical albums sold. We're not even talking about the people who listen on a podcast. It's physical, it's 66 million people who have this record in their homes."

Manoeuvre also recalls the moment when Michael Jackson introduced the world to his famous moonwalk in Motown 25 Show in 1983, shown on "Les enfants du rock" TV Show in France.

Michael Jackson worked with great musicians and producers like Eddie Van Halen, Quincy Jones and many others. According to Manoeuvre, the success of 'Thriller' was not a surprise.

"It's the talent, the combination of talents. Since then, we have been trying to explain and understand. There are undoubtedly some fabulous musicians accompanying Jackson. Most of all, there's Quincy Jones."

What's so special about MJ's Thriller?

Co-produced by Quincy Jones, 'Thriller' was Jackson's second album on Epic Records, following the commercial and critical success of the album 'Off the Wall' in 1979.

'Thriller' explores musical genres such as funk, post-disco, soul music, soft rock, R&B and pop. The lyrics of the songs are varied and deal with themes such as romance, paranoia and the supernatural.

With a production budget of $750,000, recording sessions took place between April and November 1982 at Westlake Recording Studios in Los Angeles. Assisted by Quincy Jones, Jackson signed four of the nine songs on the album.

After the release of the second single 'Billie Jean', the album rose to the top of the music charts in many countries.

Jackson achieved another record by winning eight Grammy Awards in 1984, in three different genres: pop, R&B and rock. It won Album of the Year, and 'Beat It' won Record of the Year.

With 'Thriller', Michael Jackson acquired a new status: he became, at the age of 25, a global pop icon and one of the biggest stars of the second half of the 20th century.

The album also had a pioneering impact on black-music genres and allowed Jackson to break down racial barriers through his appearances on the music channel MTV and his meeting with President Ronald Reagan at the White House. Indeed, prior to the success of 'Thriller', Jackson had struggled to get MTV airtime due to being Black.

The songs 'Thriller' (with its infamous 14-minute video), 'Billie Jean' and 'Beat It' looped on MTV - 'Billie Jean' holding the distinction of being the first video clip by an Black artist to receive heavy rotation on the network. It opened the door for other artists of colour to be featured on the channel.

'Thriller' has frequently topped greatest albums of all time lists and in 2008, it was inducted into the Grammy Hall of Fame. In the same year, the Library of Congress added it to the National Recording Registry of "culturally, historically, or aesthetically significant recordings".