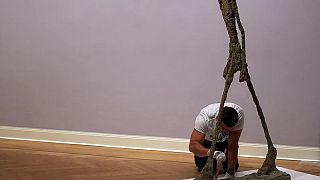 A sculpture "L'Homme qui marche" (2ndR) by Swiss artist Alberto Giacometti is prepared by an employee of the Pablo Picasso Museum in Muenster   -   Copyright  OLIVER BERG/AFP
By Jonny Walfisz  with AFP  •  Updated: 15/11/2022

A new museum in the Gare des Invalides in Paris will house the Giacometti collection from 2026.

Alberto Gicaometti was one of the most respected and influential sculptors of the 20th century. The Swiss artist was born in 1901, and the works he’s probably best known for are the rippled slender figurines he produced after the Second World War.

The biggest collection of the artist’s work, owned by the Giacometti Foundation, will be housed in a specialist museum in the region of France’s capital, right beside the Seine river.

The building of the former Invalides train station and its underground annexes were created for the 1900 World's Fair and will be completely renovated as part of a programme by the city of Paris.

On the historic Gare des Invalides in Paris, the museum will be located in the old headquarters for national airline Air France.

The 6,000 m2 area will accommodate “a museum presenting permanent and in rotation, a large part of some 10,000 works of Giacometti collected by the foundation,” Catherine Grenier, director of the Giacometti Foundation says.

The museum will open in 2026, 60 years after Giacometti’s death. The foundation which looks after his works was created in 2003 in Paris by his widow, Annette Giacometti.

In the proposed museum, the collection will include works in plaster and bronze, as well as paintings, drawings, and decorative art objects. Grenier notes that many of the works on show “are currently not accessible to the public.”

Alongside Giacometti’s own works, there will be exhibitions of modern and contemporary art that are “related to the spirit of Giacometti,” as well as a “non-professional creative school for all, children and adults, experienced or novice, offering courses in various disciplines, supervised by a group of artists,” Grenier adds.

The current home of the Giacometti Institute, where many of his works are, will remain in the 14th arrondissement of Paris. However, with the establishment of the new museum, “its activities will be rethought,” Grenier notes.

The Institute still houses the 20 m2 studio Giacometti worked in, which will be moved to the new museum.