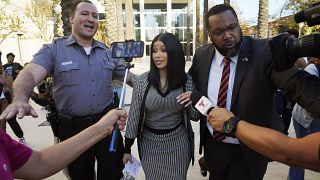 A jury sided with Cardi B in a copyright infringement case involving a man who claimed the rapper misused his back tattoos for her sexually suggestive 2016 mixtape cover art.

The federal jury in Southern California ruled Kevin Michael Brophy did not prove Cardi B misappropriated his likeness.

After the jury forewoman read the verdict, the rapper hugged her attorneys and appeared joyful.

"I wasn't sure if I was going to lose or not," she said after leaving the courthouse.

She was swarmed by several reporters, photographers and more than 40 high schoolers who chanted her name.

More details on the case

Brophy, a self-described family man, attempted to sue Grammy winner Cardi B in a copyright-infringement lawsuit, for allegedly misusing his likeness for the sexually suggestive cover art of her 2016 debut mixtape, 'Gangsta Bitch Music, Vol. 1'.

The image features Cardi B sat in the back of car drinking from a Corona bottle, whilst a man with elaborate tattoos performs oral sex on her. The man's face cannot be seen.

Brophy was seeking $5 million from Cardi B, over the appearance of some of his distinctive back tattoos, including a tiger and serpent design.

The man's lawyer A. Barry Cappello said photo-editing software was used to put the back tattoo, which has appeared in tattoo magazines, onto the male model used in the mixtape cover.

“Their life has been disrupted,” Cappello told the jury as Cardi B, whose real name is Belcalis Almanzar, watched from the defence table.

He said the image disturbed Brophy along with his wife, Lindsay Michelle Brophy, who he says initially questioned her husband if it was him in the cover art. The couple has two young children.

Cardi B, fighting the allegations, said an artist used only a “small portion” of the tattoos without her knowledge. She had previously said the cover art - created by Timm Goode - was transformative fair use of Brophy’s likeness.

A heated exchange between rapper Cardi B and Cappello got so intense on Wednesday that the judge briefly stopped the trial.

Indeed, the testy back-and-forth between the Cappello and the star witness prompted US District Judge Cormac Carney to send jurors out of the Santa Ana, California courtroom and tell both sides he was considering a mistrial.

After a break, he called the arguing “unprofessional” and “not productive” but allowed questioning to resume – placing new restrictions for both sides.

“I have empathy for people,” she said. “I care about people. I feel like I’m being taken advantage of. I missed my child’s first step by being here.”

Cardi B’s lawyer, Peter Anderson, said Brophy and the mixtape image are unrelated, noting the model did not have neck tattoos, which Brophy does.

“It’s not him,” the rapper said. “To me, it doesn’t look like his back at all. The tattoo was modified, which is protected by the First Amendment.”

Brophy said he sent a cease-and-desist letter to Cardi B’s representatives to remove the image, but he never received a response. The rapper said she hadn’t seen the letter.

This case comes a month after Cardi B pleaded guilty to a criminal case stemming from a pair of brawls at New York City strip club, that required her to perform 15 days of community service.